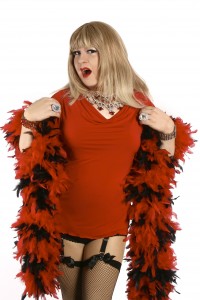 Lady Clover Honey has emerged as one of the most versatile, Drag Queen, Television and Comedy personalities!  While she is well-known in the New York City area hotspots, she has taken the art of Female Impersonation from Gay nightclubs to mainstream film, radio, expos, broadcast television and notable venues like Carnegie Hall, where she made history as the first Drag Personality to conduct an orchestra at the legendary landmark. The Lady is known for her role as a fun and glamorous television correspondent on the NYC Life TV series Under the Pink Carpet, which is also aired on MiND TV, a PBS affiliate in Philadelphia and OUTtv cable network in Canada .   She’s also made a splash on Theater scene, replacing the notorious Lady Bunny as Charity Divine in the critically acclaimed, hit production by award-winning play-writes in When Joey Married Bobby.  As an MC and hostess she adds both panache and humor to many notable events like the Fresh Fruit Festival and Original GLBT Expo at the Javitz Center in New York City Lady Clover Honey is always pushing boundaries and strives to make Gender Impersonation and alternative gender expression a more accepted and appreciated form of art and way of being!

Find out more about Lady Clover Honey at:

You don’t want to miss the February issue!