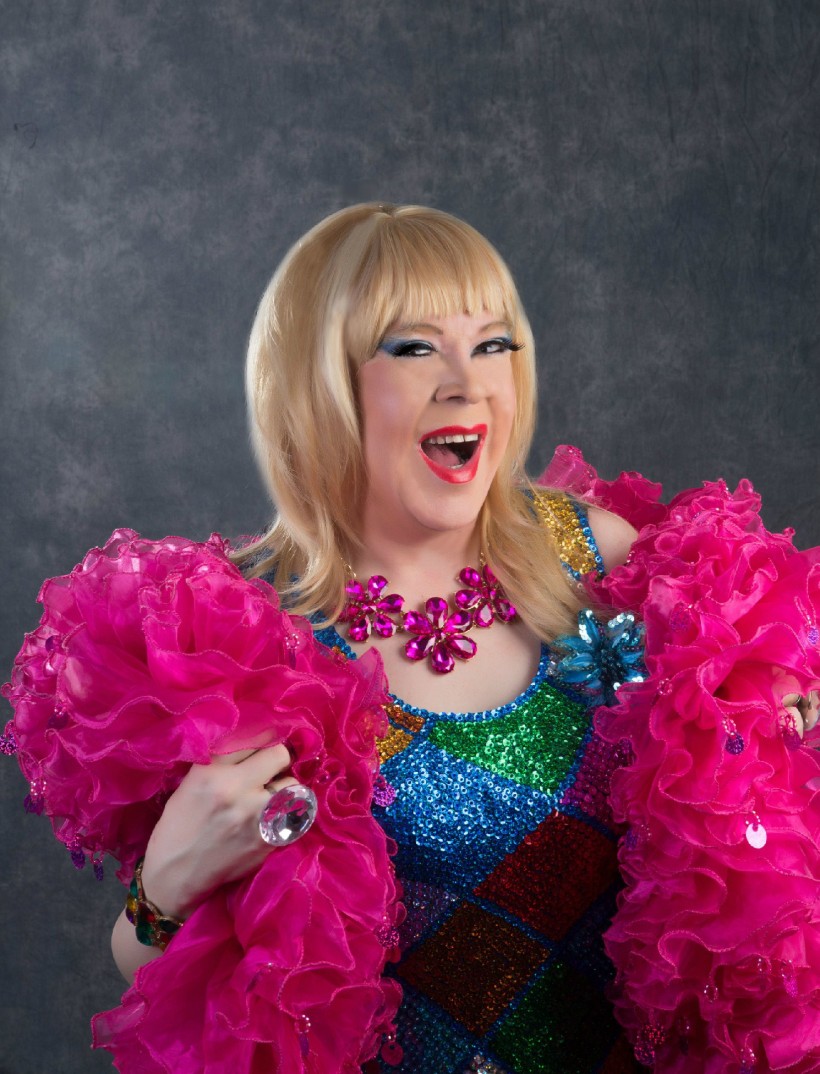 Lady Clover Honey has emerged as one of the most versatile, Drag Queen, Television and Comedy personalities! While she is well-known in the New York City area hotspots, she has taken the art of Female Impersonation from Gay nightclubs to mainstream film, radio, expos, broadcast television and notable venues like Carnegie Hall, where she made history as the first Drag Personality to conduct an orchestra at the legendary landmark. The Lady is known for her role as a fun and glamorous television correspondent on the NYC Life TV series Under the Pink Carpet, which is also aired on MiND TV, a PBS affiliate in Philadelphia and OUTtv cable network in Canada . She’s also made a splash on Theater scene, replacing the notorious Lady Bunny as Charity Divine in the critically acclaimed, hit production by award-winning play-writes in When Joey Married Bobby. As an MC and hostess she adds both panache and humor to many notable events like the Fresh Fruit Festival and Original GLBT Expo at the Javitz Center in New York City Lady Clover Honey is always pushing boundaries and strives to make Gender Impersonation and alternative gender expression a more accepted and appreciated form of art and way of being!

JRK: Before we begin the interview can you tell us who Lady Clover Honey is, about your background, where you came from and all that good introductory stuff?

LCH: I was born a boy in a suburban town in North Eastern New Jersey called Totowa where I lived in a house with my parents and a younger sister. I always had vast diverse interests which included art, music, fashion, science, animals and nature and was fascinated with my sister’s Barbie Dolls. I went to college where I ended up studying computers and technology being riveted by new concepts and ways of doing things.

JRK: You were the first openly transgender correspondent to appear on a national TV show called “Under the Pink Carpet.” Can you tell us about that and how it all came about?

LCH: I found it much easier and enjoyable when I started doing things dressed up and presenting myself as a lady and could tell that people liked and accepted me that way. I was started volunteering and working at special events and was noticed on the charity ballroom scene at events at places like he Waldorf Astoria and Marquis Ballrooms. One person who noticed me was Tony Sawicki, the host/producer of Under the Pink Carpet who saw that I certainly was a girl who got around and knew what was going on. I joined the Pink Carpet team as a “Man on the Street” reporter and then as a correspondent doing reports on the NYC Drag Scene and Transgender issues

JRK: How did you pick your name “Lady Clover Honey?”

LCH: I was using the name Clover as a male columnist/editor of a Pagan, Wiccan, alternative spirituality journal called Our Pagan Times. Clover is a symbol of luck and abundance. I thought Clover was a male name it ended in “er” but many people considered it to be a female name. I turned out to be perfect for since it is either or both male or female. As a female entertainer, I added Honey since sweetness is a lady-like attribute and gave myself the title Lady to add some panache.

JRK: You have described yourself as being born with a “feminine spirit.” Can you expand on that a bit and tell us what you mean by that?

LCH: I always spoke and acted in a soft, demure manner and loved flowers and pretty things since I can remember. I also put feeling, emotion and intuition into all my thoughts and decisions.

JRK: You have stated that you have always known you were different as a kid and yet it didn’t bother you. How did you cope with your uniqueness and why do you think it was so easy for you to deal with the teasing by other kids?

LCH: I was extremely fortunate and blessed to have a home and a family where I felt loved and accepted for who I was and for my individuality. If I didn’t have that I don’t know where I would be today.

JRK: At one point in your life you became a member of a neo-pagan group which led to your discovery of the radical faerie movement. Can you tell us a bit about this time of your life? Are you still part of these groups and how did this period of your life impact where you are now?

LCH: I was living in Park Slope Brooklyn at the time and there was a large circle of Radical Faeries that came into contact with. The Faeries are a loosely affiliated network seeking to redefine queer consciousness and spirituality. They are concerned with finding alternative ways for being other than assimilation into hetero-normative ways. Any group that celebrates being different with no striving to be normal is right up my alley. My Faerie “Sisters created, along with The Church Ladies for Choice, the annual New York City Drag March which takes places every June.

I still practice and am involved in Wicca, a practice that has male and female in divinity and has a reverence in Nature and the Seasons of the Earth. You can see why it would be right for me.

JRK: What prompted you to begin your drag queen career?

LCH: I was helping a friend with producing a charity fundraiser and was speaking with some Drag Queens about them adding some glamour. I realized that I could be just as sparkling and entertaining as them. I always craved the (literal) spotlight but never felt right in it as a guy. But as a Lady it felt so good and natural. And the make-up and jewels certainly help.

LCH: A spiritual connection helps with comfort and creativity. The Spirit also assure that you are not all alone in the world and have access to make the right decisions in this life.

JRK: You partnered with Lovari in a project called “Shore Thing.” Can you tell us about that? You have also said that the character you played in this project has helped you continue to break taboos. How has that been the case?

LCH: Lovari was a lot of fun to work with. My character was a librarian and librarians are always depicted as mousy, unattractive and non-sexual females. We did what was the opposite of expected of a librarian and made her sexy, fun, flirty and sensual. With Lovari directing, the takes were smooth and fun, not the monotonous way much of film-making can be.

JRK: What are some of the misconceptions about transgender people that need to be dispelled? How is that achieved?

LCH: The most common misconception is that Trans people are fake people. A trans woman is not a man pretending to be a woman but a real trans woman. Of course, it is a different life experience being a trans woman and being a cis-gender woman, but all our experiences are real, with real struggles and everyone should be accepted for the true person that they are.

JRK: What are some of the most important things we can tell our youth about their individuality? What can be done to encourage them to embrace it and be proud of who they are despite a society that sometimes degrades our individuality and creates disrespect and in many cases causes physical harm to those who are different?

LCH: Youth needs to know that they are accepted, they are loved, they are not alone and they matter so much.

JRK: Do you have any parting thoughts you wish to leave Diversity Rules readers?

LCH: All I can think of is that it helps a lot when you’re good at managing your time, especially when you have a diverse and varied life. Enjoy your time and love every second of your being!