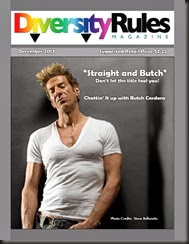 Here’s a sneak preview of Butch Cordora’s interview in the December issue!  To see the full interview you best SUBSCRIBE TODAY!  Many options available!

JRK:  Can you give Diversity Rules readers an idea of who Butch Cordora is; your background and how it has influenced who you are today?

BC:  I grew up in the Scranton/Wilkes-Barre area and moved to Philly over 20 yrs ago. When I first arrived I started pursuing acting full throttle. Auditioning for everything and anything, from theater to film, extra work to commercials and actually had modest success. The problem was, I actually wasn’t very happy and felt like I was spinning my wheels and not getting anywhere. Not to mention, I didn’t think I was all that good of an actor!

I knew I had a “voice,” something to say and an interesting point of view but I didn’t think I was channeling it correctly. Then one friend said; “You should stop playing roles and just be you.” And with that advise, I started on a completely different path, going down the road of communications and journalism (vs. acting). I immediately fell in love with this form of art and am still doing many various forms of it til this day!

JRK:  You have a lot going on in your life now, but when I first met you back in 2009 you were doing a TV show in Philadelphia called “In Bed with Butch.”  Tell us about that and when did you decide it was time to move on to other pursuits.

BC:  When I decided to make the switch and stop acting, it came in the form of a TV talk show. I pitched an idea, back in 1999, to do a gay TV chat show in a bed! I called it “In Bed With Butch” and shopped it around to over a dozen Public Access, Public Television, PBS and college stations until Drexel University gave me the green light! Fast forward 10 years and it became a huge hit, ended up getting picked up by a 2nd channel, was seen in the tri-state area (PA, NJ and Delaware) and had many, many D and C-list celebs from NYC and DC as guests.

I ended the show in 2009 at the height of its success. After 10 amazing seasons, I walked away simply because I wanted and needed to do other artistic things that I’d been putting off for a decade. I wanted to venture into the fine arts, photography, writing and filmmaking and having a weekly talk show, quite frankly, is exhausting, has you on a treadmill and you’re constantly bumping up against deadline after deadline. You simply cannot do anything else when you’re an executive producing a TV show. (it’s why Oprah hadn’t done a film in 15 years!)