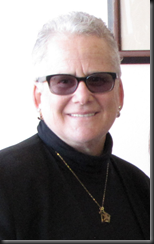 Donna Mae DePola is a lesbian, substance abuse counselor, author and founder of the Resource Training Center. From ages five to seventeen she was raped and molested on a daily basis by her father. When her father passed away, she discovered twelve film canisters documenting the abuse. The trauma prompted her to write a book about the experience called “The Twelve Tins.”

Almost from the beginning she turned to alcohol and drugs to deal with the pain, becoming at its worst a four thousand dollar a week substance abuse problem. She has been clean for over twenty five years and is determined to end the stigma associated with addiction so that people are no longer ashamed or embarrassed to get help. She is passionate about giving those who want help a second chance.

JK:  Can you give Diversity Rules readers and idea of who Donna Mae DePola is; your background and how it has influenced who you are today?

DMP:  I’m glad you wrote who I am today.  I have grown and changed so much in so many years.  As you know I am a 64 year old gay woman who has had a rough life due to abuse.  Never a victim always a survivor.  Tried never to feel sorry for myself thank God I always tried to look at the good side of everything. I started using drugs at age 9 basically to make me unconscious so I didn’t know what was going on with my dad.  I did pills, pot, Heroin or anything I could get and then finally a $4,000.00 a week habit with cocaine.  I always worked either for someone or for myself.  I went from a telephone operator right out of high school to an EMT for a local hospital.  I never was out of work.  I owned 2 delis and a restaurant all at once and never skipped a beat.  Got up 4:30 am opened at 6:00 am then to second deli at 1:00 pm then to restaurant at 5:00 pm home at 1:00 am.  Cocaine helped me stay awake and alcohol put me to sleep.  I am one of the founders of BRAVO which is a volunteer ambulance company in Brooklyn that is still thriving.  I used illegal drugs from age 9 to 35 years old.  I of course had moments that I did stop for a short time but mostly continuous.  What influenced me then was actually the people I met and the person I was with.  I was married to two men in my life because being gay was very changeling at that point.  I had 2 women men but I was gay and I hurt both of them.  Then I met a person that accepted me for who and what I was.  She never judged me or critized me.  When I was struggling with drugs she supported me.  My therapist Dr. Joan Standora was the most influential person in those days.  She helped me see who I was and how my past doesn’t have to be who I am.  See my partner then did not know what my father did and then Dr. Standora knew everything. She encouraged me to be a better person and to like myself.  Which on the outside was deceiving as I always looked like I was happy but I was dying inside.  Who has influenced me for the past 9 years is my partner Dona.  She has helped me grow and tells me when I am wrong and how to fix it.  I never had that.  I was a boss and I was a perfect partner.  So my thinking was I could do no wrong.  Now when I need advice Dona tells me like it is.  You can’t buy that anywhere.  She has defined me as women, friend and a partner.

JK:  Part of your past was influenced by a chilling and unthinkable act at the hands of your father.  We hear about this more and more and I commend you for bringing it forward and telling your story for others to hear.  Can you provide some insight in how you dealt with what your father did to you?

DMP:  How I dealt with it was simple I didn’t.  I got high to forget and acted like an asshole for years to try and make these things go away.  But the time I dealt with the issue I was clean about a month and was having PTSD and having the such horrible flash backs that I was put on medication for awhile.  What I used to do is every time I thought about my father I would get high and the thought would go away.  The problem was if I didn’t use drugs all the time I would suffer with my thinking.  So from around 1987 to today I process the thoughts and I know it had nothing to do with me and that my father was very disturbed.  As I know that sounds easy it wasn’t and is still not.  Some days I struggle with my past and try and work though it.  Talking about it with Dona and Joan helps immensely.  One big issue for me is when people who know my father say that we are so much alike.  Which we are in several ways.  Our sense of humor and how friendly we are to perfect strangers.  Also being so organized is another trait we both had.  Also the one that scares me the most is NO FEAR.