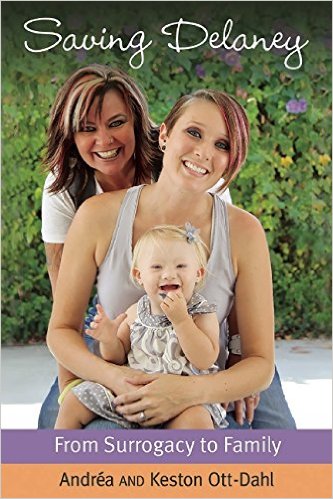 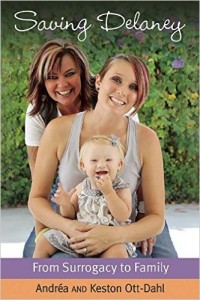 Keston and Andréa Ott-Dahl live in the San Francisco Bay area with their three children. They are the founders of the Delaney Ott-Dahl Foundation (www.DelaneyOtt-DahlFoundation.org), a non-profit organization that advocates for early intervention and offers resources for families expecting special needs children. Keston also blogs about their amazing gift of a daughter at www.delaneyskye.com.

Keston and Andréa Ott-Dahl tell the story of how they became mothers “by accident”—and against daunting odds—to a very special child. Told in the first person by Keston, this uplifting memoir traces the legal, medical, and emotional hurdles on the long and winding journey to the birth of their adorable, feisty daughter, Delaney Skye. As Keston shares, falling fiercely in love and fighting for the life of a child with Down syndrome would force her to confront her deep fear of and prejudice against the disabled. “I had been given a second chance by an amazing little muse,” reflects Keston. “She gave me a unique experience, a bizarre divine intervention that made me look in the mirror…She made me see that I could do better.”

When Andréa seized on the idea of becoming a pregnancy surrogate for a wealthy Silicon Valley couple, Keston reluctantly gave in. How could she deny another devoted lesbian couple the joy of motherhood? Andréa and Keston had no idea they’d be signing on for a rollercoaster ride. When pre-natal testing detected Trisomy 21,Andréa was urged to abort the baby—her biological baby—by the intended mothers. Despite the threat of a lawsuit and doctors’ dire predictions that the baby would probably suffer a grave heart condition, blindness, and autism, if she weren’t stillborn, Andréa and Keston vowed to keep her and do everything in their power to give their daughter the chance to live a healthy, full, happy, and meaningful life.

* How Keston and Andréa dealt with pressures to terminate the pregnancy—not only from Delaney’s “contract mothers,” but also from doctors and extended family, including Andréa’s close, usually supportive father.

* How Keston and Andréa became experts on DS—by gathering research, seeking out support groups, and watching inspiring videos of Down syndrome children and adults—and advocates for their unborn child.

During her pregnancy, Andréa added a supplement to the standard prenatal vitamins: choline, a nutrient vital to memory, muscle control, and other brain functions. Both moms regularly read and sang to Delaney Skye while she was in the womb. As a newborn, she not only immediately responded to their voices, but also reacted beamingly to familiar lyrics. Thanks to Keston and Andréa’s pre- and post-birth interventions, Delaney Skye is now a bright, energetic, adorable, and thriving toddler. She continues to meet and exceed all milestones, defying her diagnosis and delighting her many admirers. In addition to attracting an avid following on Facebook, Delaney has grabbed international headlines for gathering over 95,000 signatures on a petition appealing to Disney to create a special needs princess.

Shattering stereotypes about the limitations and quality of life for children and adults with Down syndrome, SAVING DELANEY is a heartwarming memoir that will touch and inspire all mothers. Delaney’s story—and her moms’ story—will also resonate powerfully with new and expectant parents of precious children with special needs.

See this article along with many others not reproduced in the blog. Subscribe during the month of March and get three FREE issues!

1 thought on “Saving Delaney: From Surrogacy to Family”