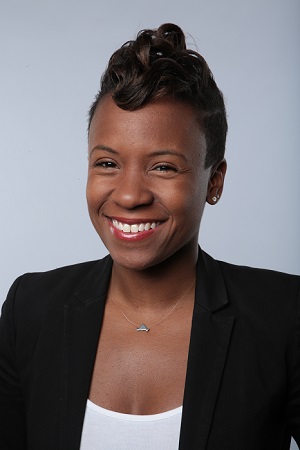 Stephanie Lampkin is the founder & CEO of Blendoor, a mobile job matching app that uses a blind recruiting strategy to circumvent unconscious bias and thus facilitate diversity recruiting in tech companies. With a 13-year career in technology spanning companies like Lockheed, Microsoft, and TripAdvisor, she is all too familiar the difficulties faced when one doesn’t #looklikeanengineer. Through technology and data, her mission is to challenge the assumptions that seeking diversity means lowering the bar or the lack thereof is primarily a pipeline problem.

Stephanie holds a BS in Management Science & Engineering from Stanford and an MBA from MIT Sloan.

Blendoor, a mobile job-matching app, which uses a blind recruiting strategy to eliminate unconscious bias and increase diversity, is set to launch during the South By Southwest Conferences and Festivals (SXSW) at the BLENDOOR DAY PARTY. The event takes place Sunday, March 13, 2016, from 1:00pm – 5:00pm, at Rainey Street Hookah Lounge, located at 84 N. Interstate 35 Frontage Rd., #201, Austin, TX, 78701. Blendoor will help tech companies like Twitter, Google and Intel identify qualified talent based on merit, not molds.

According to Founder Stephanie Lampkin, a study was conducted where two identical resumes were issued, with only a name change. The study yielded a 100 percent difference in response rate. Blendoor’s unique tactic to ensure an impartial process is to conceal the applicant’s name, gender and photo.

Lampkin’s passion behind creating Blendoor is to identify and provide opportunities for qualified talent that don’t fit the traditional model. She has been coding since the age of 13. She graduated from Stanford with an engineering degree, and has an M.B.A. from MIT Sloan. She’s also worked at Microsoft for several years. Although she applied for a Data Analytics role at a top tech company, she was told after the interview that she was better fit for sales or marketing. Fast forward three years later, Lampkin is on her way to be a giant in the tech industry and a role model—not for just women for color, but for all women, Black, Latino, Indigenous, veteran, LGBTQ, and people with disabilities.

She states, “This is a technology company, not just another staffing agency.” “Blendoor is about utilizing big data analytics, machine learning, and really showcasing the talent that has been overlooked and untapped.”

Blendoor has received critical acclaim from industry insiders and top tier organizations. To date, Lampkin has won over $50,000 from various pitch competitions, including Lesbians Who Tech, National Black MBA Association and Tech Cocktail Startup of the Year. She has also raised $50,000 from angel investors like Pipeline Angels. Blendoor will be launching with 50 companies, which include Facebook, Twitter, Microsoft, Google, Indiegogo and Pinterest.

Blendoor will be available on iOS, Android, and HTML5 (web) platforms.

See Stephanie’s article along with many others, not reproduced in the blog. Subscribe during the month of March and get three FREE issues!