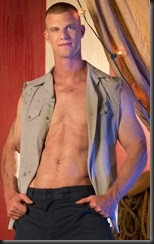 RE:  Tell our readers a little bit about who Blake Daniels is on camera?

BD:  Blake Daniels is a liberated sex junkie who uses time in front of the camera to act out and fulfill sexual fantasies and desires.  Blake has been many years in the making and is now very comfortable with himself, his sexuality and the dirty deeds he does in his videos.  When I first started making movies I was rather shy and unsure of myself, I was not fulfilling my sexual desires for fear of judgments and rejection by others.  Now I am realizing there are lots of people out there who have similar interests to me, and I should do what makes me happy.  Some of my favorite things to do on camera are good sweaty fuck sessions as well as trying new things out of my comfort zone.

RE: If you had to pick one scene in your career that was the hottest what would it be?

BD: The scene that I found the hottest in my career would have to be my scene with Ethan Wolfe in the movie titled Bad Seed, that was just recently released by TIM.

Ethan and I had instant chemistry and had a lot in common.  Once the camera started rolling we just did what came naturally and it turned out very hot.  That particular scene was filmed almost two and a half years ago and for some reason TIM held on to it without releasing it.  I thought I would never get to see that scene and didn’t know they finally released it until I started getting messages on Facebook and Twitter from fans complementing me on the scene.

RE:  From a performer’s point of view, what are some misconceptions viewers might have about the gay adult entertainment industry.

BD: People often have many misconceptions about industry and I am frequently amused by some of the questions I get asked.  For starters, people often assume that having sex on camera is possibly the best job in the world.  In reality there are many factors that can affect that, who you are working with (no you almost never get to choose your scene partner), the chemistry with your scene partner (sometimes you get paired with someone and you are able to feed off each others sexual energy and sometimes you work with someone that while hot and sexy you, you have zero sexual chemistry with), the director (some directors are great and really help the scene flow and provide a great vision, others lack the people skills necessary to comfort people and get them in the right headspace to perform to the best of their ability), how long a scene takes (I have had scenes done in as little as an hour and I have had scenes that have dragged on for 12 hours.)  The other big misconception is that the sex is always great.  When having sex on camera you have to keep in mind that in order for the viewer to be able to see everything that’s going on you often must do things in very uncomfortable positions and not do them as you would in your own bedroom.  So just because you are paired with a sexy hunk, get along great and can’t  wait to ravage each other, the best sex for the performer is often off camera.

RE:  You won a 2013 Raven’s Eden award based on fan votes. This is your chance what would you like to say to your fans?

I was excited by this prospect and agreed to do the scene.  A few days before we filmed the scene they asked me if I could try double penetration on camera.

I had done this in my personal life maybe twice at this point, so I agreed to this also.  I had no idea they meant everyone in the scene would DP me.  Had they asked that up front I would probably said no, but looking back at that scene it turned out great and to this day is one of the scenes I get the most feedback from fans about.

I want to thank everyone that voted for me, I truly appreciate it.