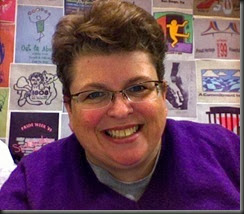 Susan K. Thomas is a lecturer in English at the University of Kansas where she spreads the good gay word through LGBT literature and first year composition courses. She is currently researching the impact of HIV/AIDS on the LGBT community in Kansas. She has two cats, Hannah and Hamlet (Ham).

Q. I have really enjoyed your column and usually find them really insightful. However, I think you really missed the mark on polyamory. How can we ever expect marriage equality and equal rights if people are living in open relationships?? I’m just really surprised that you support it when it hurts our cause. Andy

Well, Andy, you’re not the only person to email and call me out on that column. A number of people have. And, I have gone back and forth on how to respond to your argument. My thoughts on this could fill a book, but my editor will make me condense it, so here is the abridged response: LGBTQA people are not all the same. We don’t all want the same thing, and we don’t all fit into the same mold.

Not all LGBTQA people want to marry or believe that it is a necessary; in fact, many feel that marriage equality is just another attempt to fit in with the heterosexual majority. However, we don’t see these people out boycotting or shunning those who do want to marry. While some people want to be in a relationship with one person, others feel differently.

Not all people are completely fulfilled with one partner. And, it isn’t right to ask people to attempt to fit into an ideal that you have created because you don’t agree with it. The heterosexual majority has been doing this to us for far too long, but we have fought back and argued that we don’t fit into their mold. But now when we begin to acquire rights, some in our community turn on those who continue to stand out.

Andy, we need to accept each other for our differences, including those who wish to have open relationships or live in a polyamory relationship. As far as what the heterosexual majority thinks about those in the LGBTQA community, why do we care? Why should I fit into some mold for anyone? So that I can have the right to marry?

I would rather know that I have equal rights under that law on all levels without consideration to who I bed. I would rather be safe from firing in the state where I live (thankfully I can’t because I work for a state institution, but if I was working for a company outside of my current city, I would not have that right).  I would rather know that the numbers of kids living on the street for being LGBTQA was non-existent because our community stepped up to do something about this ongoing issue. I would rather know that a friend isn’t going to be beaten or harassed because he is caught in the “wrong” bathroom that doesn’t match his biological anatomy.

And, I would rather know that a friend could marry whomever he chooses, whether that is one woman, a woman and a man, two women, two men, etc.

We have to stop pointing at others in our community for why we haven’t achieved equal rights and instead say, “No, accept us for who we are, in whatever form we take, and for whomever we love.” I don’t understand how this can be that difficult. People are people. Just accept their differences and move on.

“Inqueeries” is an interactive column.  Readers are encouraged to submit questions for Susan to answer!