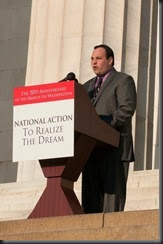 Adrian Shanker served from 2011-2013 as President of Equality Pennsylvania, a 60,000-member statewide LGBT advocacy organization in Pennsylvania. He has led successful campaigns to win a non-discrimination law in Bethlehem, PA and equal spousal benefits in Allentown, PA and Easton, PA. He worked with the Philadelphia City Council to pass their landmark LGBT Equality Bill, which created a first-in-the-nation ‘Equality Tax Credit’ for businesses who offer equal spousal benefits or transgender health care coverage to their employees. Adrian was one of 6 LGBT speakers at the 50th Anniversary of the March on Washington: The National Action to Realize the Dream. In 2012, Adrian was named Person of the Year by the Philadelphia Gay News for his work expanding equality at the municipal level throughout Pennsylvania.

JRK:  You were one of 6 LGBTQ speakers at the 50th anniversary of the March on Washington.  How did your selection come about?

AS:  It was an honor to be invited to speak at the 50th Anniversary of the March on Washington: The National Action to Realize the Dream. In my role as President of Equality Pennsylvania, I participated in efforts to mobilize our community in advance of the march. Specifically, I spoke at an event with Martin Luther King III at the Community College of Philadelphia and I encouraged the LGBT community to attend the march. A few days later, I received an invitation to speak at the march. Being invited to speak at such an important and historic event is certainly the biggest honor of my activist career. When I found out that I would be just one of six LGBT speakers, I felt even more honored to participate!

JRK:  What were your impressions of the March?  Did it meet your expectations and do you think it impacted today’s civil rights movement, specifically for LGBTQ Americans?

AS:  In my opinion, the march was successful for two reasons. Primarily, it demonstrated the intersectionality of the civil rights movement today — today, the civil rights movement is about comprehensive immigration reform, marriage equality, voting rights, affirmative action, sensible gun control, workplace non-discrimination, safe schools and workers rights. I think people left with a sense of urgency to start working together on these and other issues and to work together to achieve our common goals of a more equal America. Secondarily, the march was a success because all of the speakers made it clear that attendees need to take action at home in order to “realize the dream” that Dr. King shared 50 years ago.

JRK:  What was the main focus of your comments?

AS:  In my two-minute slot, I spoke as a gay Pennsylvanian and reflected on the history of the original march, organized by another gay Pennsylvanian (Bayard Rustin) who wasn’t on the official speaking list. It’s incredibly important that, as activists, we recognize the paths that have been paved for us and the people who paved them. I then spoke about the similarities between the issues that were march for 50 years ago and the issues being marched for today. 50 years ago, they marched for jobs, voting rights, safe schools and freedom. in 2013, we’re marching for employment non-discrimination, we’re marching against discriminatory voter-ID laws, we’re marching for safe and bully-free learning environments in our public schools and we’re marching for marriage equality — the fight is all too similar and in my remarks, I quoted Bayard Rustin’s remark that “we need in every community, a group of angelic troublemakers” and I asked marchers to go home be angelic troublemakers to help realize the dream that Dr. King shared 50 years ago.

JRK:  How do we take the energy from the march and move forward?

AS:  We all need to take action in our own communities. We all need to be registered to vote, and show up, informed, at every election. We need to write letters to the editor in our local newspapers in support of employment non-discrimination (In New York, GENDA, in Pennsylvania, HB300), we need to talk to our member of congress about why Comprehensive Immigration Reform matters for the LGBT community. We need to push back against discriminatory laws like NYC’s Stop and Frisk law or Pennsylvania’s VoterID law. We need to make sure that local school board members pass comprehensive anti-bullying policies, and we need to fund the marriage equality fight in every state where our marriages are not yet recognized. We need to do all of this and more, but mostly, we need to organize in our community so we can demand the changes that we so desperately need.