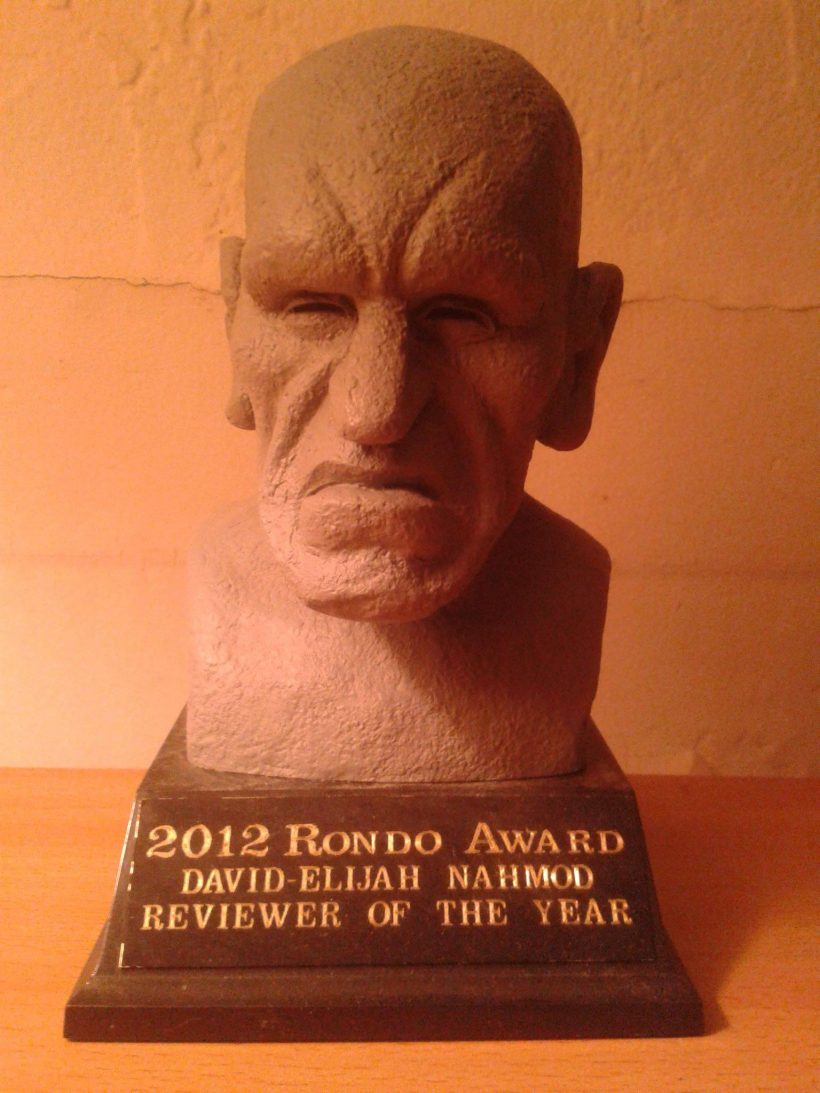 So I’ve been nominated for an award. I’m nominated in the Best Columnist category at this year’s Rondo Hatton Classic Horror Film Awards (www.rondoaward.com ), which annually honors the horror genre’s best in film, television, writing and art. It’s not my first nomination–at the 2012 Rondos, I was voted Best Film Reviewer for reviewing horror movies in Scary Monsters and Videoscope Magazines, two print publications.

This time out I’m nominated for Bay of the Living Dead, a twice a month column I do for Broke Ass 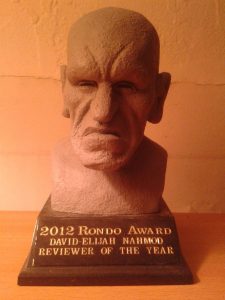 It’s always fun to be nominated for a Rondo Award, and winning as I did in 2012 was a genuine thrill–I now display my award statuette proudly. I’ve been campaigning for my current nomination on social media, hoping for the best. It would be nice to win again, but regardless of what happens this year, my 2012 award identifies me as a winner for life!

It, therefore, saddened me to see a fellow nominee campaigning against me on Facebook. My “opponent” (I’ve never met nor spoken with the guy) is angry at me for a scathing hit piece I wrote about the fan base of the classic TV series Dark Shadows, a show which has made recurring appearances in this column.

“The author continuously badmouths the show, some of the actors, the festival attendees, the festival attendants, and the festival’s sponsors…not to mention DS fandom altogether,” he wrote on the pages of several mutual Facebook friends, two of whom told him to keep his personal vendettas off their timelines.

Indeed wrote a story titled Why Do Dark Shadows Fans Hate So Much? Which was published on July 7, 2016, in Bay Area Reporter, an LGBT publication in San Francisco:

This was neither the first nor the last time I wrote about the atrocious conduct of the Dark Shadows fan base. I stand by every word. Anti-gay attacks, ridiculing people with physical disabilities and mental health issues, stalking, harassment, threats, physical assaults, these are some of the reprehensible behaviors which go on at Dark Shadows Festivals, related events, and Dark Shadows chat rooms.

During my junior high years, I ran home from school to watch Dark Shadows. The show launched my lifelong love of classic horror films. The time travel storylines on Dark Shadows, which took viewers back to the 18th and 19th centuries, gave me an appreciation for costume dramas and a great deal of respect for stage-trained actors. The show’s at times brilliant writing taught me to love words and played a hand in leading me towards a writing career I now adore.

In some ways, Dark Shadows literally changed my life. It was, therefore, a sad disappointment to attend Dark Shadows Festivals–fan events similar in structure to Star Trek cons—only to find myself in the midst of such an ugly cesspool. Far too many Dark Shadows fans have viciously attacked other fans over disagreements about a particular storyline’s merits, who’s this cast member or that cast member’s “best friend” or whether or not series star Jonathan Frid was gay. He was.

The attacks often cross over into stalking and can go on for years, My fellow Rondo nominee is the second fan to come after me. In October 2016 I needed police intervention in order to get rid of a crazed fan who claims to have been Jonathan Frid’s “best friend”. Among other things, she monitored my Facebook page under a false identity and contacted more than 300 people, including my brother and my ex-partner’s children. She also threatened in writing to contact my editors. She carried on like this for years while the promoters of the Dark Shadows Festivals, dozens of other fans and even a few cast members cheered her on. All because I “outed” Jonathan Frid in an article for Fangoria Magazine, never mind that Frid’s homosexuality has been common knowledge for decades:

What I’ve seen in Dark Shadows fandom is very similar to what we now see in the Trump White House and across the GOP spectrum. Only Dark Shadows fans aren’t behaving like this over religious/political disagreements, they’re carrying on like psychotic twelve-year-olds over who’s the “better fan” of a TV show which ended its network run 45 years ago.

Is this how sane, rational people behave?

Dark Shadows taught me many things. Today when I revisit some of those old storylines on DVD, I still marvel at how complex and brilliant the show’s writing actually was—some of that writing continues to inspire me to do better work in my own writing career.

But mostly the behavior of the Dark Shadows fan base has shown me how mentally unhinged American society actually is. How can we reasonably expect Israel/Palestine, or North Korea/South Korea, or liberals/conservatives find any kind of common ground if people can’t even watch a damn TV show without lunging at each other’s throats like rabid dogs?

Collectively as a society, we need to talk about mental health. We need to do so now.

1 thought on “A PTSD Memoir: What I Learned From Dark Shadows”