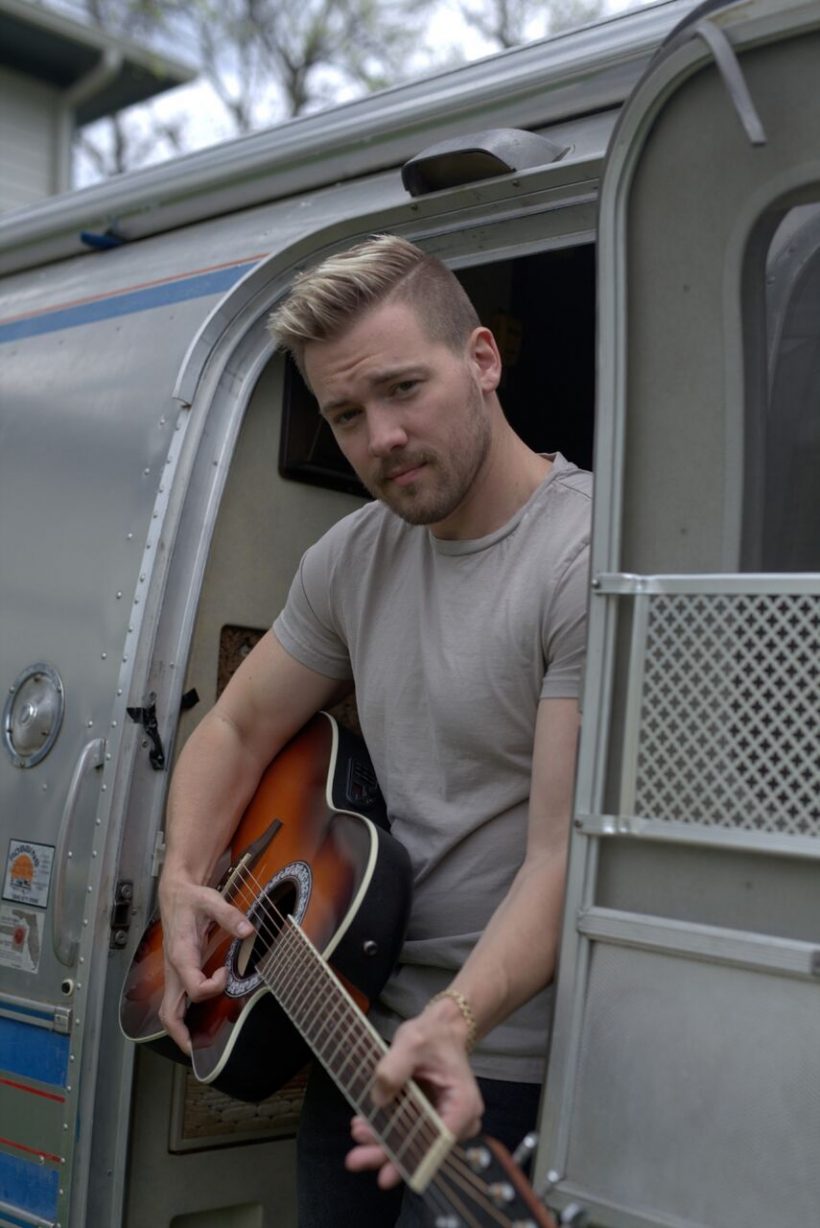 Davis Mallory is a singer-songwriter, DJ, actor, and former reality TV star. Born and raised in Marietta, GA, Davis grew up in a musical family and sang in his church choir starting at the age of 5. It was obvious Davis would pursue a career in music, yet the result is a storied and eclectic career.

In 2006 shortly after graduating pre-medicine from Stetson University, Davis was cast on MTV’s The Real World: Denver and went on to star in subsequent MTV Real World: Road Rules Challenges: The Inferno 3, The Duel 2 and Rivals. This relationship with MTV lead Davis to a role as a music news correspondent for the MTV-owned NewNowNext.com where Davis curated playlists, reviewed live shows, promoted new music and interviewed artists including Ellie Goulding, Janelle Monae, NERVO & Graffiti6.

Davis was always a singer, but he began learning to song write in 2012 by writing over instrumentals given by producers and co-writing with other artists friends in New York and Los Angeles. In 2013 Davis began to focus solely on songwriting and recording music.

For more information about Davis, go to his website at www.davismallory.com.

JRK: Before getting into the interview, can you tell us a bit about yourself, where you are from and all that good introductory stuff?

DM: I’m from Marietta, GA. I currently live in Nashville, TN! I am a singer-songwriter, DJ, TED Talk speaker and formerly was on MTV’s The Real World (Denver) in 2006.

JRK: You launched your career with MTV on “The Real World.” How did that all come about?

DM: I auditioned to be on MTV’s The Real World my senior year of college. I had just come out of the closet that year and told the story of my family’s reaction and my classmates response which got me on the show. Since it was my last year of college and I was trying to figure out what my first job was going to be, I thought that if I didn’t get on the show, that perhaps

I could meet someone at the audition that could help me get a job at MTV.

JRK: What were some of the more memorable experiences you had while doing “The Real World?”

DM: Going to Thailand was one of the best parts of the Real World. I did 3 challenges The Inferno 3 in South Africa, The Dual 2 in New Zealand and Rivals in Costa Rica. The travel was definitely a perk of the job.

JRK: Do you still keep in touch with your fellow cast members?

DM: Throughout the year different cast members come in and out of my life at random times. I am friends with Mike Manning from Real World: DC who came to Nashville last year and saw me sing. I am going to LA this summer to song write and record and will probably stay with him. He’s a great guy. My cast had a 10-year reunion this fall and 4 of us (Stephen, Tyrie, Colie & myself) got together in Denver. It was my first time there since we finished filming in 2006. When I lived in NYC from 2011-2013 I saw cast members a lot more often than I do living in Nashville. The only other ones who live here are Brooke from my season and Kimberly from Real World Hollywood lived here the first year I lived here. She’s moved away.

JRK: In addition to your reality TV past, you are a singer and songwriter. When did you start to focus solely on your songwriting career?

DM: I grew up in a musical family and sang in my church choir starting at the age of 5. My uncle John Mallory is a songwriter who has written songs recorded by Sixpence None the Richer and Wynona Judd. My uncle Chaz Corzine is an artist manager who managed recording artists Amy Grant, The Civil Wars’ Joy Williams and Michael W. Smith. During high school I sang in an a cappella group in my church which included Dove-award winning artist Kristian Stanfill, singer-songwriter Sean McConnell (who has written songs by Brad Paisley, Rascal Flatts, Tim McGraw) and recording artist Ryan Horne (whose music has been featured on ABC’s Nashville TV series & Sons of Anarchy). When I finished filming the Real World I spoke to the Producer of the show and asked him what I should do next. His advice was whatever I wanted to do before I did the show – for me, that was to work in music. I went on to become a music news correspondent for the MTV-owned website NewNowNext.com and then became a Marketing Coordinator for Universal Music Group’s Astralwerks Records (dance label home to David Guetta, Halsey, Swedish House Mafia, Empire of the Sun, Kylie Minogue, The B-52s). It was during my time at Astralwerks that I took Dj classes and began spinning around NYC nightclubs. I also began writing songs over instrumentals given to me by producers and co-writing. I started writing with artist Parson James in 2013 (who is on Kygo’s “Stole the Show”) and I moved to Nashville that same year as my dad had just moved here too. From 2013-2017 I have written over 178 songs in co-writes, highlights include writing with GrGrammy-winning songwriter Scot Sax, BMI Songwriter of the Decade Roger Murrah, 3-time Grammy nominated songwriter Matraca Berg, Bonnie Bishop (Chris Stapleton’s Grammy-winning album is produced by Dave Cobb and Cobb just produced Bonnie’s new critically acclaimed album Ain’t Who I Was), among countless others. I have been able to write with the people who have written some of my favorite songs and in 2016 I began to record with topnotch producers my favorite material to put together on a debut EP titled LOUD which will be out 7/7/17.

JRK: You have said that you channel your emotions into your songs. What do you seem to write about the most or is it more dependent upon what you happen to be dealing with at a particular moment in time?

DM: A lot of the times I am writing about either a specific person/experience that I’m going through – sometimes it’s about love lost or found – sometimes it’s about something spiritual I want to communicate through music like spreading love or a belief in God of afterlife, I aim to spread positive message in my music and hope that the music I release and others experiences causes peace or healing. I do aim to write fun dance songs because I am a DJ and I want to make music that I can play and people enjoy which is why I team up with EDM producers and get remixes made of my songs.

JRK: Your newest EP “LOUD” was released on April 25th. Can you tell us a bit about that as well as the first track that is being promoted?

DM: So the single “Loud” is out on April 25, however the entire EP will be out on 7/7. The first song we released off the EP was “Under Your Spell” on Valentine’s Day which was a love song I wrote over a beat produced by Nashville pop producer KELLR. The song is about falling in love and under someone’s spell through the process. I’ve fallen for many guys in my life and each time have felt that power that love feeling creates. The second song which is out April 25 is “Loud” the title track of the EP. I wrote “Loud’ with pop artist Mitchell Rose we wrote this from scratch over piano and then I found producers to create 3 different versions of the same song. The song “Loud” tells the story of seeing someone who you are attracted to, and trying to convince them you could love them better, how you want to take them home and show them the kind of love you have to offer. There was a guy in my life that I had a major crush on when I wrote the song so thinking back on it I believe I know who the influence was for writing it – although he turned out to be straight unfortunately and has a girlfriend now. The version of “Loud” created by Landis came out first on Jan 20 2017 and it is my first song ever to be signed to a record label – it’s on Delecta Records founded by Cedric Gervais (famous for his “Summertime Sadness” remix by Lana Del Ray). The version produced by Nashville duo Ricca Vita & J. Hanna is the version that is paired with a Music Video released on April 25th which has a synthy-80s electro pop production. The final remix as of yet is by BPT an LA based producer whose manager worked for Skrillex for 8 years. I told BPT I wanted a version that felt like Mike Posner’s “I Took a Pill in Ibiza (Seeb Remix)” and he did just that for the song. All three are great!

JRK: You are going to be heading out to tour at pride festivals and other venues promoting the new release. Can you tell us about some of your upcoming gigs and where you’ll be?

DM: Yes so I just got confirmed to play Milwaukee Pride on June 11th along with Betty Who, 10,000 Maniacs, Steve Grand & Todric Hall. I’m excited and as it is my first pride performance I am putting a lot of energy into the creation of the show. I will have dancers a full band performing over these EDM beats.

I am going to LA in June to write/record but also plan to perform while I am there at some pop and LGBT venues. There is an EDM Festival in August in TN that I am in talks to perform at as well, so ramping up for more shows!

JRK: Are there any parting thoughts you’d like to leave Diversity Rules readers?

DM: I appreciate the support from your readers – as an independent artist I have been working an uphill battle to shed my reality TV past and become the musician I have wanted to be since I was born. It’s been 4 years of songwriting to finally have a project like LOUD that I am ready to release. This year I have been writing towards what would be the follow up. I appreciate all the support that can come from your readers, be it any type of performing opportunities which I very much want to do this year! Feel free to reach out to me directly at [email protected] or find me on my socials at www.facebook.com/davismallory, www.instagram.com/davismallory, www.davismallory.com

A lot of my music can be heard on my Soundcloud page www.soundcloud.com/davismallory as well as official released are up on Spotify, iTunes and other music outlets.