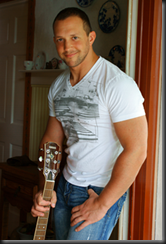 Released in 2005, Utley’s first album Runaway received critical acclaim from audiences and critics in the LGBT community and created a dedicated online following.

The lead single has been announced as Great Escape and was premiered by New York publication Next Magazine on their website on November 1st.  It debuted on Sirius-XM’s OutQ radio channel following Utley’s interview with the Six Pack show on November 2nd.  A music video for the single is scheduled for production in early 2012.

Utley’s 2010 single Stand For Something won the 2011 OutMusic Award for Outstanding Country/Folk Song of the Year by the LGBT Academy of Recording Arts.  A previously unreleased live version of the single, recorded at Salt Lake City Pride, is included on the new album.

An Ex-Mormon raised near Salt Lake City, Utah, Utley is perhaps the only openly gay performing artist to have survived ex-gay therapy, a practice that he vocally opposes.  His experience coming to terms with his sexuality and religion have emerged as strong themes in his songwriting and on-stage storytelling.

“I’ve been asked if I could take any of it back, you know, what I’ve experienced.  I wouldn’t,” says Utley.  “Its part of me, my story, and its been a hell of a journey.  And I’m here to share that.”

Utley is also known for his leading role as country superstar Tommy Dautry in the New York musical Our Country, for which he won Best Actor at the Planet Connections Theater Festival in 2010.
The album will be available for purchase on I-tunes and Amazon.com, as well as at:

For more information including booking and interview requests, contact Dan Maierle at: