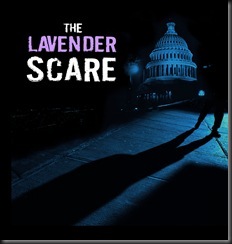 The Lavender Scare is the first feature-length documentary film to tell the story of the U.S. government’s ruthless campaign in the 1950s and ‘60s to hunt down and fire every Federal employee it suspected was gay.

While the McCarthy Era is remembered as the time of the Red Scare, the headline-grabbing hunt for Communists in the United States, it was the Lavender Scare, a vicious and vehement purge of homosexuals, which lasted longer and ruined many more lives.

Before it was over, more than 10,000 Federal employees lost their jobs. Based on the award-winning book by historian David K. Johnson, The Lavender Scare shines a light on a chapter of American history that has never received the attention it deserves.

It examines the tactics used by the government to identify homosexuals, and takes audiences inside interrogation rooms where gay men and women were subjected to grueling questioning. These stories are told through the first-hand accounts of the people who experienced them.

The Lavender Scare shows how the government’s actions ignited an anti-gay frenzy that spread throughout the country, in an era in which The New York Times used the words “homosexual” and “pervert” interchangeably, and public service films warned that homosexuality was a dangerous, contagious disease.

While the story is at times infuriating and heartbreaking, its underlying message is uplifting and inspiring. Instead of destroying American homosexuals, the actions of the government had the opposite effect: they stirred a sense of outrage and activism that helped ignite the gay rights movement.

The Lavender Scare is currently in production, and is produced and directed by multiple Emmy Award winner Josh Howard.  Executive producers are Betsy West, a television executive and filmmaker with 25 years of experience in documentary production, and Kevin Jennings, CEO of Be the Change, former Assistant Deputy Secretary of Education, and founder and former Executive Director of GLSEN, the Gay, Lesbian and Straight Education Network.