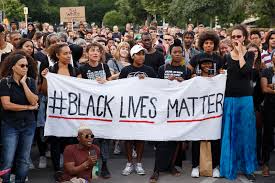 Our great nation has always been characterized as one that respects the personal dignity of all citizens, where all are treated fairly, and where everyone has the same rights as everyone else. That is what we are told and taught in our history classes anyway. It is driven into our heads from a very young age, that our constitution protects us all and guarantees life, liberty, and the pursuit of happiness. Of course, any sane, rational American knows this is not the truth, especially those Americans who have been marginalized and largely ignored such as our black brothers and sisters.

In reality, our African-American citizens, have endured unspeakable atrocities at the hands of a white-privileged society for centuries. Our great nation, which was built on the precepts of freedom and liberty for all, through its leaders through the centuries, have made a mockery of those founding principles with being intertwined with a despicable socio-economic system that was premised on slavery. Our great nation saw fit to build its fortunes on the backs of men and women, through no fault of their own, who were cast into slavery, bid on, bought, and sold in public markets throughout our young country. The bondage of fellow human beings in the throes of slavery is certainly one of our darkest periods. Even though a Civil War was fought to end the scourge of slavery, and formalized with Abraham Lincoln’s Emancipation Proclamation, our black brothers and sisters since that time have never really achieved the equality, and fairness they were guaranteed by Lincoln’s decree.

After many years of civil and racial unrest, and attempts to foster a more perfect union, the Civil Rights Act of 1964 was signed into law by President Lyndon Johnson. The Civil Rights Act of 1964 banned segregation on the grounds of race, religion, or national origin. It also disallowed segregation of public venues such as courthouses, parks, restaurants, theaters, etc. The act also banned the denial of service simply because of the color of one’s skin.

Also banned via Title VII of the Act was race, religion, national origin, and gender discrimination by employers and labor unions, with a vehicle through which the power existed to file lawsuits on behalf of those who felt they were discriminated against.

Additionally, the act disallowed using federal funds for any discriminatory program, as well as gave authorization to what is now the Department of Education to facilitate school desegregation. It also strengthened the Commission on Civil Rights and prohibited the unequal application of voting requirements.

Despite the passage of laws, most notably the Civil Rights Act of 1964, to protect our African-American citizens through the years, unfortunately, prejudice and racism have been an integral part of the social fabric of America. The struggle continues to this day and appears to be one that will be with us for many years to come, as we now see with the current racial unrest fostered by the murder of George Floyd at the hands of overzealous, and clearly, racist policemen. If George Floyd’s murder was not enough, the brutal shooting of unarmed Jacob Blake in the back 7 times after he attempted to break up a fight and was walking back to his car, in front of his children, leaving him paralyzed, was another brazen act of attempted murder at the hands of overzealous policemen, clearly with some sort of racial bias. As this was all occurring, they allowed 17-year old Kyle Rittenhouse to roam freely with an AR-15 assault rifle who ultimately murdered 2 people in cold blood, and seriously injuring a third. Police officers allowed him to leave the scene despite witnesses identifying him as the shooter. Despite claims of self-defense, the autopsy of his first victim showed he was shot in the back multiple times. There was no act of self-defense involved at all. It was an out and out cold-blooded, and cowardly murder.

Since George Floyd’s murder, the Black Lives Matter (BLM) movement has become a force to combat police brutality and to highlight the atrocities against black Americans.

As per the BLM website, “Black Lives Matter was founded in 2013 in response to the acquittal of Trayvon Martin’s murderer. Black Lives Matter Foundation, Incorporated is a global organization in the US, UK, and Canada, whose mission is to eradicate white supremacy and build local power to intervene in violence inflicted on Black communities by the state and vigilantes. By combating and countering acts of violence, creating space for Black imagination and innovation, and centering Black joy, we are winning immediate improvements in our lives.”

BLM is “a collective of liberators who believe in an inclusive and spacious movement. We also believe that to win and bring as many people with us along the way, we must move beyond the narrow nationalism that is all too prevalent in Black communities. We must ensure we are building a movement that brings all of us to the front.”

BLM affirms “the lives of Black queer and trans folks, disabled folks, undocumented folks, folks with records, women, and all Black lives along the gender spectrum. Our network centers those who have been marginalized within Black liberation movements.”

BLM works “for a world where Black lives are no longer systematically targeted for demise.”

BLM affirms the humanity of black citizens, their contributions to this society, and their resilience in the face of deadly oppression.

Black lives MUST MATTER if all lives are to matter. BLM is a “is a rallying cry for ALL Black lives striving for liberation.”

Violence has become a part of many BLM protests, which is unfortunate, but probably a necessary component of the movement given the horrendous acts of brutality that have been committed against countless black Americans at the hands of racist police officers, and others, that has lead to the deaths of many simply because of the color of their skin and/or simply being in the wrong place at the wrong time. But one must beg the question as posed in a Facebook post by someone else, “Why is murder an appropriate response to property damage but property damage isn’t an appropriate response to murder?” I am certainly not advocating violence to the level we are seeing in some large cities in which atrocities against people of color have happened, but it IS a legitimate question to ask and ponder.

Diversity Rules Magazine fully supports BLM. No life is safe or guaranteed as long as our black brothers and sisters keep getting gunned down by police officers who have a clear racial bias against African-American citizens, many of whom are our neighbors and friends and are continually and habitually persecuted and discriminated against because of the color of one’s skin. America cannot exist, it cannot fulfill its inherent mission of equality and justice for all with such hate and enmity toward its black citizens who have been the brunt of centuries of persecution and discrimination. It has got to stop!

But will it ever stop? We can certainly hope so. However, that appears unlikely in the short-term, as the fires of racial discontent are being fanned by our very own President. He thrives on fomenting chaos, and dissension, and pitting Americans against Americans to ignite the flames of fear in those who sense their white-privilege is waning and/or may be taken away if our current occupant loses. It is this fear of losing this privilege that mobilizes his base of support and keeps them as rabid and vile as ever. He attracts the militias and white supremacists to his cause under the guise of saving America and making it great again. They all have a very warped perspective on what greatness is as it does not include those who are different from them nor does it include the disenfranchised or other minority groups seeking justice and fair treatment from our nation’s police forces.

Let me be very clear about something. Supporting BLM does not mean being against the police. I for one know many police officers who are fine, upstanding individuals who put their duty to protect all, no matter who they are, above any other interests they may have politically. Nor does it mean advocating for the abolishment or disbanding of our nation’s police forces. We need security and assistance to maintain law and order. However, there is nothing wrong with reallocating resources not necessarily needed to undertake policing activities, to community awareness programs, racial and social advocacy programs, as well as community interactive programs that will shed a better light on our police forces.

Here in my hometown, there was a BLM display that was tastefully done and was one that highlighted pictures of black men and women who died at the hands of police brutality. Many were against the display stating it would serve no purpose but to divide the community. There were fears that it would potentially foment dissension and protest and that we did not need to have such a divisive display in our community. None of the concerns expressed by those against the display came to pass. Their worry over its impact on the community was unfounded.

It is communities like mine that NEED displays like this to sensitize those who may not come into contact with the violence and the discrimination happening in other communities and hopefully create a better understanding of why there is a need for organizations like BLM. They also attempt to get people thinking about their white privilege and sensitize them to the plight of our black brothers and sisters.

What exactly is white privilege? Many of the rabid right-wingers and those who do not feel America has a racial problem at all, white privilege is grounded in how hard they worked, and that nothing was given to them. They worked for what they got, and they came from limited means. Thus they have no white privilege because they say they understand the struggle associated with have limited financial means. Well, let me clue you in on something, white privilege is NOT even remotely close to this skewed vision that perpetuates the racial bias in our country.

Our president preys on the emotions of those who fear the loss of that privilege. That is why so many fear BLM because it lays bare the cold, raw nerves of racism and what lies within the darkness of one’s soul. It causes many people to face the truth about themselves that they are not what they make themselves out to be to others. BLM empowers marginalized communities, and gives them a voice in a society that has silenced them for so long, takes them for granted, and only seeks them out when votes are needed in an election.

I fear racism may never go away, as young people are being indoctrinated by white supremacist parents all over the nation. They will grow up to replace those that go before them. They will take up the cause of purity, and Christian righteousness as they hide behind their guns, confederate flags, and other putrid manifestations of the hate that lies in their hearts.No, racism may never go away but we can certainly contain it, and keep it in the fringes where it belongs and prevent it from adversely impacting the lives of so many through our government institutions, police forces and other venues that its evil has infiltrated.

We can and must hope for a better tomorrow. We can hope for a better America and a return to the values we all cherish and hold. We must work to dispel the vileness that has infiltrated our nation and combat it with every fiber of our being. We deserve better. America deserves better. It will be a long, difficult journey to quell the strife in our nation, but it can be done. It will be done. It must be done. For America’s sake and the future of democracy as we knew it before the Trump Era unleashed its hate and divisiveness on the nation.