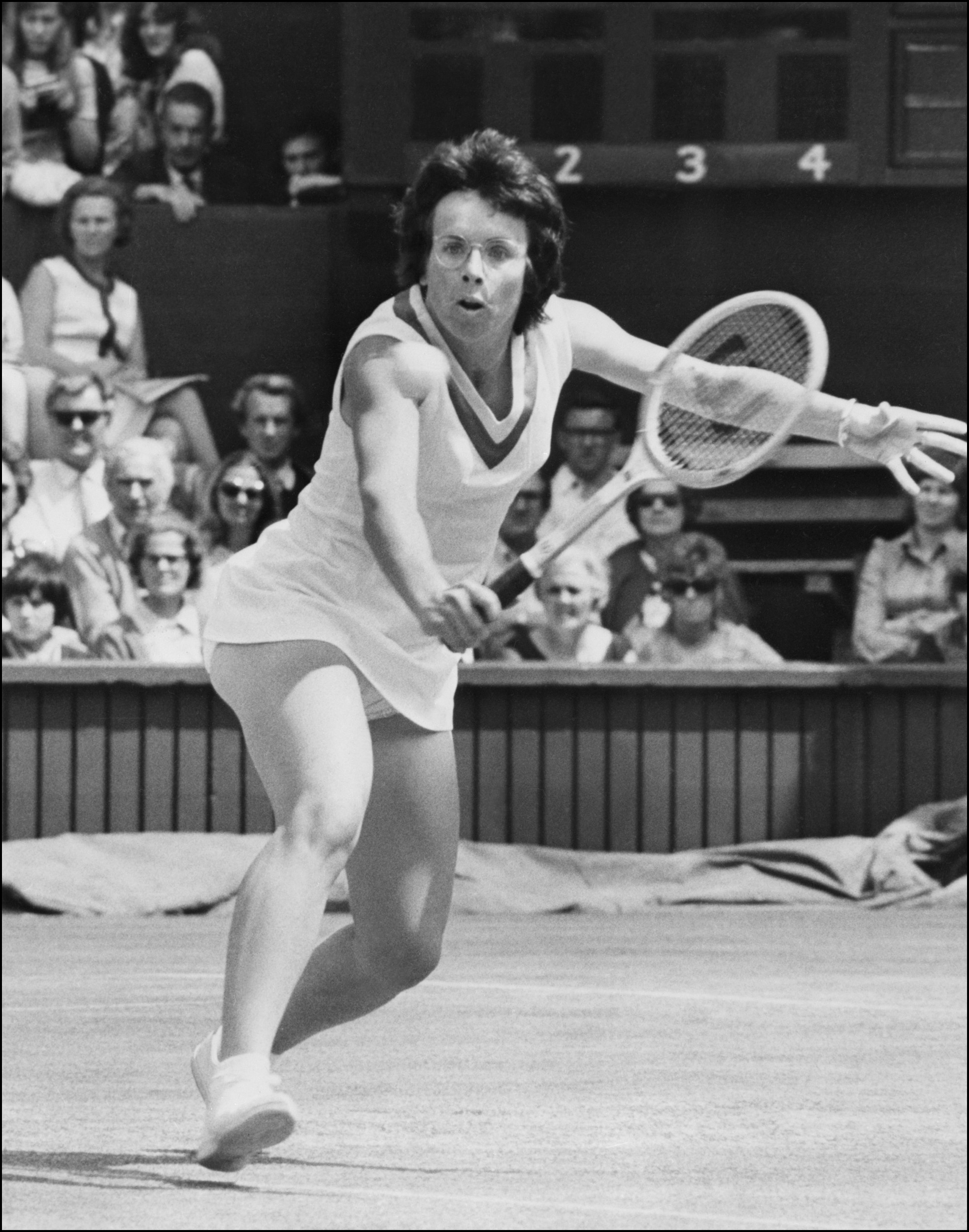 Billie Jean King is best known for being the first feminist in sports. She beat self-proclaimed “Male Chauvinist” Bobby Riggs in the infamous “Battle of the Sexes” match back in 1973. She is regarded as one of the greatest women’s tennis players of all time, ranking World Number 1 tennis player for 3 non-consecutive years in the 1970s, recognizable with her trademark glasses. A pioneer of the sport who was “outed” in the early 1980s, but bounced back and became an advocate for the LGBT community and pioneer for gender equality.

Born in 1943, Billie Jean Moffitt was a part of a very athletic family. Both parents excelled in sports, and her younger brother (Randy Moffitt) was a pitcher in Major League Baseball. While she enjoyed (and excelled) playing shortstop in baseball, she switched to tennis at the age of 11. Tennis professional Clyde Walker became her tennis coach that year, who discovered that she was a natural at the sport, winning tennis tournaments as a teenager. When asked what she wanted to do with her life, she said (and quote): “I’m going to be the best tennis player in the world.”

In 1961, at the age of 17, Billie Jean won the women’s double title during her first attempt at Wimbledon. Her tennis partner, Karen Hantze, was 18, making them the youngest team to win the Wimbledon Double title. They repeated their winning performance the following year, becoming two-time winners in Doubles.

In 1973, former men’s tennis champion Bobby Riggs claimed that women’s game was so inferior to the men’s game that he (55 years old at the time) could defeat the top woman. Billie Jean had rejected earlier requests to play him, but she finally relented after a $100,000, winner-take-all match was put on the table. On September 23rd of that year, in front of 30,000 spectators and an estimated 90 million viewers on TV (across the globe), she beat him 6-4, 6-3, 6-3. The match, even today, is considered the single most significant event in gaining women’s respect and recognition for the sport. The two had become and remained friends until his death in 1995.

During the early 1970s, Billie Jean realized that she was attracted to women and began a relationship with her secretary, Marilyn Barnett. In 1981, after a bad break-up, Barnett publicly sued Billie Jean in a palimony suit, forcing Billie Jean to come out and admit her sexuality, but calling it “a fling and a mistake.” While she remained married to her husband throughout the lawsuit, they eventually divorced in 1987 (the two are still good friends today). Billie Jean met Ilana Kloss (another tennis player) later that year; they are still together today.

Today, Billie Jean, though no longer on the tennis court, remains an active member. She and her ex-husband and formed the World Team Tennis and remained with the organization until 2017. She was also the founder of the Women’s Tennis Association and the Women’s Sports Foundation. She was inducted into the International Tennis Hall of Fame in 1987, and the National Women’s Hall of Fame in 1990. In 2006, the USTA National Tennis Center in New York City was renamed the USTA Billie Jean King National Tennis Center. Billie Jean was given the Sports Personality of the Year Lifetime Achievement Award by the BBC in 2018. She continues to use her story to inspire other women to thrive to be the best. A legendary tennis player, Billie Jean King deserves all of the accolades and respect in the sports industry.