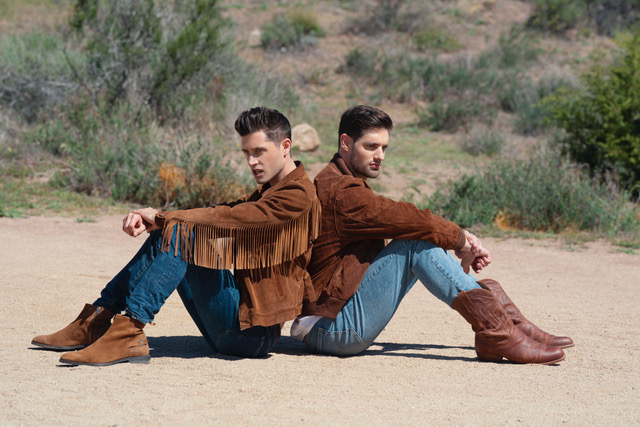 Stewart Taylor is out now with the visual for “Maybe We Shouldn’t Talk,” his catchy true-to-life pop tune about breaking ties with an ex-lover. Directed by Benjamin Farren and filmed primarily at Vasquez Rocks National Park in California, the video depicts the unraveling of Taylor’s last serious relationship. “It can be extremely difficult to move on from someone you love,” he reflects, “even when you know it’s bad for you. Sometimes the only thing you can do to stop the unhealthy cycles of a toxic relationship is to stop talking altogether.” Stewart Taylor’s “Maybe We Shouldn’t Talk” is being distributed independently and is available on Apple Music, Spotify, and all digital platforms. Its video is available on YouTube as of Friday, September 2.

“My ex and I argued over anything and everything,” Taylor continues from his LA home. “If there was a boundary that I set, he would cross it every time. I’m not saying he was a bad person. I did things, too, that hurt the relationship. It’s just that we all have our demons. I didn’t respond well to his and he didn’t respond well to mine. Some people simply shouldn’t be together.”

The video for “Maybe We Shouldn’t Talk” reflects on the song’s portrayal of the struggles of a venomous relationship. Taylor made sure to include a game of tug of war to depict the constant push and pull. There are also scenes with the two lovers chasing one another, battling it out, and then passionately making up, all in front of a fantastical canyon backdrop. “It was fun to recreate my life through the lens of fantasy,” he says. He admits he took some creative license. “Did my ex and I ever fight and chase each other through a desert? No. But it’s more interesting to recreate our dynamic against that backdrop because it represents how it often felt for me emotionally.”

Jake Dean Taylor plays the role of the ex-boyfriend in “Maybe We Shouldn’t Talk”. Australian Actor Stephen Multari and up-and-coming pop artist Kelechi also play troubled love interests in the video. Dancers are Kyle McCraw and former Glee cast member RILAN. Julie Vegliante, who has worked with Lady Gaga, choreographed the video. The role of the snake is played by Beau, a real-life sweet and well-behaved python that was provided by the same family of handlers who supplied Britney Spears with the seven-foot python she performed with her “I’m A Slave 4 U” production at the 2001 VMA’s.

Stewart Taylor is an LA-based singer, songwriter, dancer, and MMG model. He grew up in a small town outside of New York City, performing in local talent shows and Lower East Side clubs. He graduated from Boston’s Berklee College of Music.

“My look, sound, and artistry have changed dramatically since I first started releasing music in 2015,” Stewart Taylor acknowledges. “Back in college, I was heavily inspired by David Bowie, and everyone I came across expected me to sing rock music. I love rock, but my heart is in soul and pop, more in the line of early George Michael and Prince. I’ve worked hard to get in touch with the R&B influences I grew up on and I’ve become a better dancer, singer, and songwriter in ways that I never could have imagined a decade ago.”

If there is one thing Stewart Taylor has learned these past few years: the importance of great friends, creativity, and walking away from unhealthy relationships. “I learned the hard way that being half of a destructive duo will never make a person whole,” he says. “Walking away is so much easier said than done, but if I can leave the toxic relationship I was in, I believe anyone can.”

Stewart Taylor’s “Maybe We Shouldn’t Talk” is being distributed independently and is available on Apple Music, Spotify, and all digital platforms. Its video is available on YouTube as of September 2. Visit stewarttaylorofficial.com. Follow on IG @imstewarttaylor