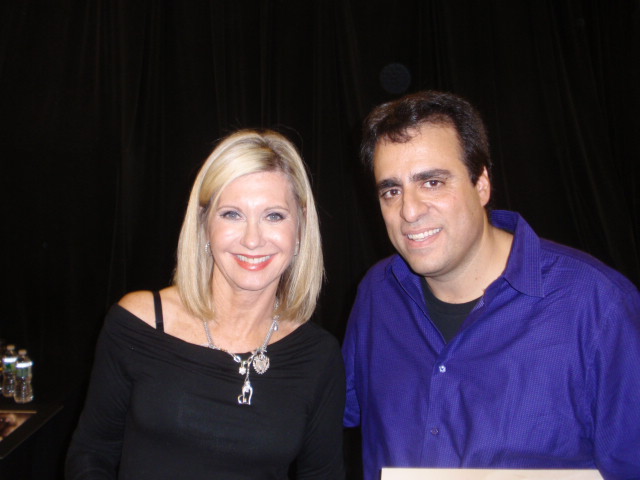 August 8, 2022 … On that day, I lost my all-time favorite singer — Olivia Newton-John. Even as I am writing this, I am still finding it difficult to accept that she is gone. Olivia has been a part of my life since I was 6 years old when I first saw the movie GREASE. While she was not a relative, and I did not have her number on my phone, she was a part of my life every day for decades. I know she touched many lives besides mine, so I am going to dedicate this article to Lovely Livvy.

If you’re not familiar with her career, allow me to give you an education about Olivia. Long before GREASE was made, Olivia had spent years in the recording studio. She won a singing contract while in high school, and she and her Mom moved to the UK to begin her music career. By 1971, she was signed with a British label and recorded the Bob Dylan song “If Not For You,” a modest hit in1971. But it was her 1973 single “Let Me Be There” that became her first Top 10 hit and won her a Grammy Award for Best Female Country Vocal Performance. The following year, her first #1 song “I Honestly Love You” earned her two more Grammys – Best Female Pop Vocal Performance, and the Top Grammy Award – Record of the Year. In addition, she won the Country Music Award (CMA) for Female Vocalist of the Year. The latter created a series of backlash from staples of country music artists.

Members of the Grand Ole Opry like George Jones, Tammy Wynette, Dolly Parton, Mel Tillis, Barbara Mandrell, Dottie West, Conway Twitty, and others, formed the Association of Country Entertainers (ACE), people who protest the influx of pop artists to enter country music to promote “real country music.” Unfortunately for them, the group proved ineffective and was quickly dissolved as quickly as it formed. (Dolly Parton must have gotten over her hurt feelings because the following year, Olivia released a cover of “Jolene,” which was another hit.

In 1977, Olivia was offered the role of a lifetime – Sandy Olssen opposite the up and rising star John Travolta in GREASE. (NOTE: It was John who wanted her for the role, who met her in person to convince her to take the part.) After much discussion (and a successful screen test), Olivia accepted the role, and the rest is movie history. Two songs were written by her regular producer/writer (“You’re The One That I Want” and “Hopelessly Devoted to You”) to feature her vocal range on film. And do I need to talk about Sandy 2? Released the following year in June 1978, Grease had become the highest-grossing movie musical of all time, shattering sales in tickets and record sales for the soundtrack. Olivia received the high honor of performing “Hopelessly Devoted To You” at the 51st Academy Awards, as the song was nominated for Best Song (but lost to “Last Dance” (Donny Summer) from Thank God’s It’s Friday.)

In 1980, Olivia went back to the movie set to make another movie musical, XANADU. The movie was not as successful as her previous movie, but the soundtrack was a success, pushing out 5 Top 20 hits (including her classic song “Magic.”) But the following year, Olivia, with a new look and a more rock sound, released “Physical.” In a song about S-E-X, Olivia tried to downplay the meaning with an exercise video. Instead of softening the song, the video catapulted her to super-stardom as it sat in the #1 spot for 10 weeks, the longest streak for any song in the 1980s. The video earned Olivia her 4th Grammy Award for Video of the Year, and Olivia Newton-John holds the honor in the history books of recording the #1 Song of the 1980s (not Madonna, Michael, Whitney, Prince, Cyndi, or Lionel).

In 1992, Olivia was first diagnosed with breast cancer, and after successfully beating it, she spent the next 30 years in the fight against cancer, creating organizations and foundations to help in battling cancer. It’s during this time that Olivia didn’t call herself a “survivor” but a “thriver,” a person who has won. In 2012, she opened the Olivia Newton-John Cancer & Wellness Centre. Olivia believed it was important to battle cancer and experience wellness programs to support patients in body, mind, and spirit. Sadly, her cancer first came back in 2013 (but kept private), then returned in 2017 as Stage 4 cancer. She spent her remaining years at her California ranch, until her sad death. (As I am writing this, I am still finding it hard to believe it’s true.)

As a fan, I am grateful for all the work she had done for cancer research. Both of my parents battled cancer; one thrived (Mom), and one did not (Dad). I have Uncles, Aunts, and cousins who battled cancer. The work that she had done, and the hospital she created, will continue her mission to get to a world where cancer no longer exists.

As a performer, her music touched me and thousands more across the globe. Through Olivia, I have met many friends over the years who share our admiration for her, and we have been, and continue to be, a great support system. Olivia will continue to live in her music, her movies, and in our hearts forever.
xoxo xoxo

If you want to read more of Tony’s articles, then check out the blog.

3 thoughts on “In Memoriam: Olivia Newton-John”