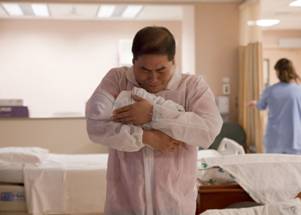 An Inside Look at the Lives of Women Who Are Carrying Babies as Surrogates
for Gay Couples, Single Men and Infertile Couples

A surprising — and booming — industry has emerged in Boise, Idaho. In this idyllic, all-American city, nurses, nail technicians, and stay-at-home mothers are choosing to become paid reproductive surrogates for people from around the world. “Made in Boise” goes inside the lives of four of them as they build relationships with the intended parents, prepare for the rigors of pregnancy and navigate the mixed feelings of their own families, who struggle to understand their choice to risk the physical and emotional complications of carrying babies for someone else. Directed by Beth Aala, “Made in Boise” opens the new season of Independent Lens Monday, October 28, 2019, 10:00-11:30 PM ET (check local listings) on PBS, PBS.org and the PBS Video App.

As the number of surrogate births surge across the country, an epicenter of the movement is Boise, Idaho, with its large population of healthy women of reproductive age and a significant number of Mormon and Catholic communities who value large families. In Boise, it is estimated that one in 15 mothers will carry a baby for a stranger at some point in her life. For gay couples, single men and those who struggle with infertility, this industry — outlawed in many countries around the world — is often the last resort to biological parenthood. Legal in some states and illegal in others, a number of states, including Idaho, have no laws governing surrogacy on their books.

Each of the women in the film — Nicole, Chelsea, Cindy, and Sammie — arrives at the decision to become a surrogate for her own reasons. Nicole and her husband have two children and run Idaho’s largest surrogacy agency, which works with the other surrogates in the film. Nicole “loves being pregnant” and is in the midst of her fourth surrogate pregnancy when the film opens. Stay-at-home mom Chelsea has four children of her own and sees surrogacy as a way to process the stillbirth she suffered eight years ago. Neonatal Intensive Care Unit nurse Cindy is one of the many nurses who become surrogates at St. Luke’s Boise Medical Center to help the unique families coming through the local hospital. A single mother with two biological and three adopted children, she becomes a surrogate for the first time at age 42. Sammie, a 26-year-old nail technician, and single mother looks forward to the second income she otherwise wouldn’t have. But her friends and family are apprehensive about her choice.

“Using humor and pathos, director Beth Aala shares deeply personal stories about one the most intimate aspect of our lives — how we create family,” said Lois Vossen, Executive Producer of Independent Lens. “Surrogacy is complex, and ‘Made in Boise’ balances issues like ethics, health risks to the carrier and what constitutes parenthood in this growing phenomenon. The film asks us individually to answer a fundamental question: what defines a family?”

Visit the “Made in Boise” page on Independent Lens, which features more information.

Cindy works at the Neonatal Intensive Care Unit at St. Luke’s Boise Medical Center and is a surrogate for Julian, a single intended father from Spain.

Chelsea is a mother of four of her own children and surrogate for Ernesto, a single intended father from Spain.

Sammie is a single mother to Walter and a surrogate for David Tsung and Todd Curzon. After a successful birth, she is planning on carrying a sibling for the couple; the three of them have recently started a business consulting with hopeful parents in Taiwan.

Beth Aala (Director) is a three-time Emmy Award-winning producer and recipient of a Peabody Award for her documentary work at HBO. Beth’s most recent feature documentary, Rancher, Farmer, Fisherman (Sundance, 2017), which she co-directed and produced, is a film about unlikely conservationists based on New York Times best-selling author Miriam Horn’s book of the same name. Beth also directed and produced Supermensch: The Legend of Shep Gordon (Toronto, 2014) with comedian Mike Myers for A&E IndieFilms. The documentary is an intimate and entertaining portrait of talent manager Shep Gordon, the most famous man you’ve never heard of. It won a Hollywood Film Award and garnered a 2015 News and Documentary Emmy Awards nomination. Her directorial debut, Pool Party, is the untold story of McCarren Pool turned music venue in Williamsburg, Brooklyn, featuring music and performances by the Beastie Boys, the Breeders, M.I.A, Sharon Jones, Yeah Yeah Yeahs, Sonic Youth and Yo La Tengo. It played in festivals around the world.

Beth Levison (Producer) is a seasoned independent producer/director and the recipient of two national Emmy Awards and three Peabody Awards. As producer, she recently completed 32 Pills: My Sister’s Suicide (Hot Docs, 2017), a raw, personal portrait of grief, which premiered on HBO in 2018. Prior to that, she produced The Trials of Spring (Human Rights Watch International Film Festival, 2015), a cross-media project that included a feature-length documentary and six shorts about women human rights activists in Egypt, Tunisia, Libya, Syria, Bahrain and Yemen, which premiered on PBS stations in 2018. Her independent documentary directorial debut, Lemon (DOC NYC, 2011), was executive produced by Impact Partners and Russell Simmons, shown at festivals around the world, and broadcast on PBS stations nationwide.

Independent Lens is an Emmy® Award-winning weekly series airing on PBS Monday nights at 10:00 PM. The acclaimed series, with Lois Vossen as executive producer, features documentaries united by the creative freedom, artistic achievement, and unflinching visions of independent filmmakers. Presented by ITVS, the series is funded by the Corporation for Public Broadcasting, a private corporation funded by the American people, with additional funding from PBS, the John D. and Catherine T. MacArthur Foundation, Wyncote Foundation, and the National Endowment for the Arts. For more visit pbs.org/independentlens. Join the conversation: facebook.com/independentlens and on Twitter @IndependentLens.