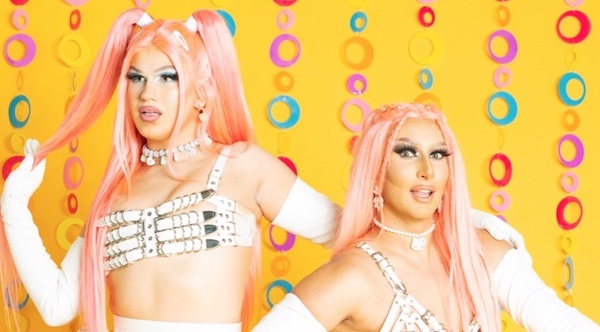 Just A Taste, the debut EP from the drag-duo DJ-production team known as Jawbreakers, dishes out dance, pop, and tech house songs suitable for clubs and partygoers at home enjoying a late-night kiki. “The EP is a sampling platter of beats with something for everyone,” says Kali Forni-Kate of Jawbreakers. “It’s Just A Taste because there is 100% more to come,” adds her collaborator, Sabrina Babyslut. With songs like “This Is Dirty” and “Ciao Bella,” the EP reflects the group’s live DJ shows that emphasize how Jawbreakers are not only playing the party, they are the party.

“Boyfriend,” the EP’s first release, is a modern-day remake of Ashlee Simpson’s 2005 hit that chronicled her stealing Wilmer Valderrama from Lindsay Lohan. The Jawbreaker version features vocals from Amunda (formerly from Operator Please). Its accompanying music video, directed by Nyssa Mitchell, conceptualized by Jawbreakers with editing, and FX by Zachary McSweeney, is a technicolor dream, with Kali and Sabrina dressed in eye-catching lewks. The Just A Taste EP is being distributed through Extrovert Music, a division of Vicious Recordings, and will be available on Apple Music, Spotify, and all digital platforms on April 1. Jawbreaker’s “Boyfriend” music video is now available on YouTube as of January 21.

Kali and Sabrina first met in 2016, performing in a Britney Spears tribute show in Melbourne. They immediately clicked as both came from similar middle-class, nuclear family backgrounds, discovered drag via their passions for musical theatre and began their adventures into the art form after high school. When they learned of their shared interest in music production, they decided to join forces as a DJ duo. They bought a mixer and six months later they were in business.

“The biggest hurdle was deciding who stands where in the booth,” Kali explains. “Sabrina is left-handed and I’m right. We had to fight over who uses the left and right DJ decks. Swapping throws off our groove!”

Their Jawbreakers name harkens back to the iconic candy from their childhoods and the 1998 teen film that starred Rose McGowan, Rebecca Gayheart, and Julie Benz as the “it” girl clique who reign supreme in their high school. “It’s a reflection on how the drag that we do is heavily inspired by pop culture,” Kali continues. “Like the girls in the movie, we dress to have fun, and through the music, we play and the energy that we exude, it makes everyone want to party with us!”

The duo has already headlined several international festivals including Sydney Mardi Gras and Milkshake Festival in the Netherlands. Their next big gig will be Summer Camp Festival where they will perform alongside Years and Years, Big Freedia, and The Veronicas. They are also slated to perform the next Goodlife U18 event, as well as Adelaide Festival, St Kilda Festival, and Melbourne Pride.

“We have been keeping an eye on Jawbreakers for several years,” says Damien Platt of Extrovert Music, a division of Vicious Recordings, the label that discovered Avicii when he was a teenager, and released his first ten records. “When Kali and Sabrina presented us with demos of the EP, we were instantly fans of the music. It’s fun, it’s camp, and it’s quality music.”

Jawbreakers is not Extrovert Music’s first foray into gay dancefloor music. Label co-founder Andy Van, of the band Madison Avenue, had a #1 dance anthem with “Don’t Call Me Baby”. More recently, Sgt Slick’s recut of “Gimme! Gimme! Gimme!” went gold and has become a major queer anthem. “Extrovert Music is focusing on dance-pop/disco/commercial/cross-over releases,” Platt continues. “A majority of our new signings and existing roster who identify as LGBTQIA+ are producing this sound.”

While Jawbreakers’ unique look has helped attract attention to their work, Sabrina admits that performing as hyper-feminine drag artists has made it harder for fans and the music industry to take the duo seriously. “We’ve had straight DJs hit on us and others wonder who the random chicks were in the booth,” she explains. “But way more people have shown their support and their desire to see us succeed.”

“We’re lucky to live in an era when queer culture is proving that we can be a force in any and every industry,” Kali adds. “Never underestimate what a queen can achieve. It only makes us work harder.”

Jawbreakers’ “Just A Taste” is being distributed through Extrovert Music and is available on Apple Music, Spotify, and all digital platforms. The “Boyfriend” video will be available on YouTube on January 21. Follow on Instagram @ JawbreakersDJ