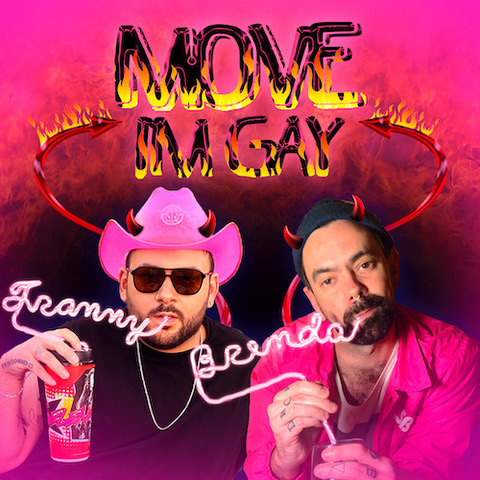 Move, I’m Gay, the podcast starring Francisco and Brendan (better known to listeners as Franny and Brenda) will premiere its 100th episode on Tuesday, February 22, 2022. Taped live each week from their studio in Portland, Oregon, the show has gained a national following for the comical camaraderie between its two seemingly polar-opposite hosts. While Franny dishes on the latest entertainment dirt, and maybe belt out a Top 40 hit or two, Brenda references obscure gay historical facts. There’s also a bit of politics thrown in, as the two banter, laugh, and drink their way into listeners’ hearts.

“I had never been a fan of podcasts,” admits Francisco. “I have only listened to a couple and most of them have been a true crime, so it’s interesting to find myself hosting a comedy show. Honestly, the real reason I’m here is I broke my leg and I needed something to do with my life.”

The pair had only hung out with each other casually before starting the Move, I’m Gay podcast in February 2020. “We have very different personalities,” Brendan explains. “Francisco is up on trends and I’m slightly clueless to them, but we seem to mesh well in terms of our interaction and it’s nice to have solidified our friendship through two years of weekly recordings.”

The show’s segments are a favorite among listeners. In the “Gay of the Day” segment, they highlight some of the outstanding accomplishments of individuals in the LGBTQ+ community. “We love heaping praise on the bravery of celebs like Lil’ Nas X and JoJo Siwa who have come out loud and proud and others like Jeopardy! champ Amy Schneider who are raising LGBTQ+ awareness on unexpected platforms,” says Francisco.

“It’s also encouraging to be able to report on progressive legal news, especially the expanded rights being enjoyed by queer people all around the world,” Brendan adds.

But with the sugar comes the medicine. The pair regularly share their real-life trials and tribulations, like in the “Hog Hunters” episode when Brenda was forced to come to terms with the truth about the man he had been speaking with on Tinder. “I had to

be convinced live during the episode that I was being catfished. All of the obvious signs were there but I simply wasn’t willing to admit it.”

In their “Bless This Mess” segment, Franny and Brenda lament the week’s most shameful events. “Some of our most heated shows from last year were centered around transphobia and the right’s increasingly unhinged fight against BLM and voter’s rights, and their refusal to believe that we’re in the middle of a God-damned global pandemic,” says Francisco.

“In the beginning, we didn’t expect the Move, I’m Gay podcast to be so political,” he continues. “It was meant to be more about our shared love of the free Britney movement and detest for Gwyneth Paltrow’s Goop with maybe a few bits about Wendy Williams burping and farting simultaneously while live on air tossed in for good measure.”

Both agree that being LGBTQ+ today is inherently political. “We realized pretty quickly that avoiding the serious topics would come across as tone-deaf, and that’s the last thing we want the show to be,” Brendan explains.

The podcast has been a learning experience for the pair. “I’ve found that my favorite shows are when we’re our real selves, imperfections and all,” says Francisco.

Brendan agrees. “Being authentic seems to be working for us. Like the great Cheryl Lynn sang in her 1978 self-titled debut studio album, ‘Got to Be Real.”