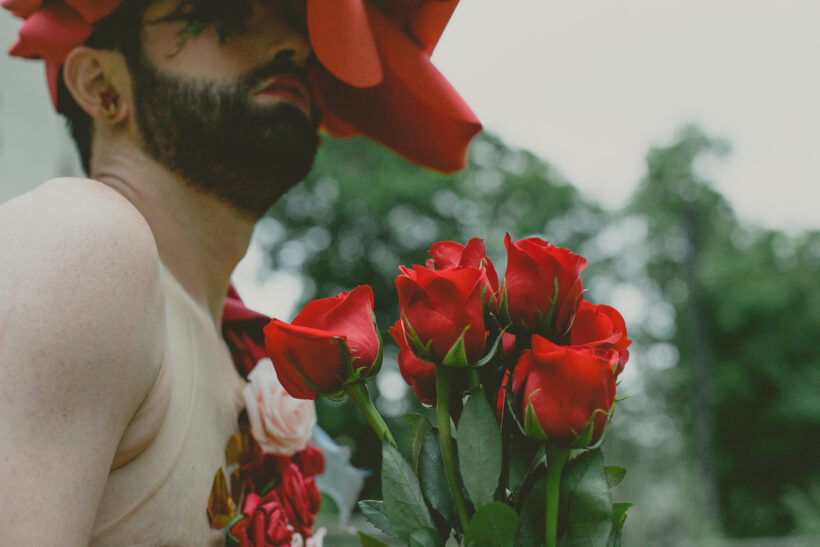 John Jarboe (she/her) is a director, singer, writer, producer, and host serving you revolution, herstory, queer community making, and a whole lot of glitter. She is the founding artistic director of The Bearded Ladies Cabaret, a Philadelphia-based company, now eleven years old. She has directed and written original work performed at La Mama ETC, Joe’s Pub, and for Opera Philadelphia, the Philadelphia Museum of Art, The Wilma Theater, Works & Process at the Guggenheim, and Lincoln Center’s American Songbook Series. As a writer and performer Jarboe has toured to Paris, Poland, New Zealand. As a director, Jarboe has directed and helped create shows for Cookie Diorio, legendary Mezzo Stephanie Blythe, and for Countertenor Anthony Roth Costanzo. Rose:

You Are Who You Eat is a true story set to music. Artist John Jarboe writes:

She said, “You know you had a twin in the womb?”

She said, “You ate her. That’s why you are the way you are.”

This was a lot to swallow.

My aunt’s pronouncement that my gender stemmed from an act of fetal cannibalism is the seed for this piece: a celebration and “digestion” of this newfound twin, who I later learned would have been named “Rose.”

A shrine of music, image, objects, and text, Rose brings together a team of queer artists, including composers and musicians Emily Bate, Daniel de Jesús, Pax Ressler, and Be Steadwell with director Mary Tuomanen, to tell the legend of John and Rose. Jarboe, known as the founding artistic director of the Bearded Ladies Cabaret, explores this tale through musical styles ranging from art song to 1980s pop ballad, elaborate floral-inspired costumes made by Rebecca Kanach, intimate storytelling, and a feast of wordplay. This evening will feature a concert of original songs performed by a live band and set alongside a garden of images made with filmmaker Christopher Ash. After this event, the project will continue to evolve into films and an art installation in which fellow genderqueers can nourish their own idiosyncratic identities.

Rose first came to life in Jarboe’s Works & Process Artists (WPA) Virtual Commission, an initiative launched by Works & Process in the early days of the pandemic to provide artists with creative and financial support during a period of uncertainty. Working towards shaping a more inclusive, fair, representative, and colorful world, Works & Process commissioned the live performance of Rose and provided the project with a bubble residency at Mount Tremper Arts in fall 2020. In spring 2021 the project also received a Works & Process bubble residency at Bethany Arts Community, made possible by The Andrew W. Mellon Foundation and the Doris Duke Charitable Foundation, which culminated in an in-process performance at the Guggenheim rotunda in one of the first indoor performances permitted by New York State during the pandemic.

Following the Works & Process premiere on March 26, the concert experience of Rose can be seen at CulturalDC’s Source Theatre on April 1-2. Over the next 18 months, CulturalDC will work with Jarboe to realize the evolution of Rose into an immersive, multidisciplinary installation. Conceptualized as an interactive cabinet of curiosities, Rose will be presented in CulturalDC’s Mobile Art Gallery (a shipping container turned moveable art space) in summer 2023. Jarboe will activate the installation with a series of public performances. This is a continuation of growing artistic partnership – in fall 2021, CulturalDC hosted Jarboe and the Bearded Ladies’ Beardmobile for its first appearance outside of Philadelphia. “CulturalDC is thrilled to continue the partnership with John and provide the infrastructure and platform for the Rose team to grow this work,” says Executive Director Kristi Maiselman. “We excel at collaborating with artists who are challenging themselves and the mediums in which they practice. It’s exciting to synthesize John’s deep talents as a performer into a queer interactive installation.”“It’s not every day you learn that you are a gender cannibal,” says John Jarboe.

She continues: “I’ve been working on this project with Works & Process since spring 2020, but in a way, I have been working on it since conception. It’s been a long process of digestion and one I’m ready to share with people in live space. It’s a healing ritual of sorts that I hope will do for the audience what it is doing for me.”

“As queer folx, however, we identify, we are always in dynamic tension between being who we are authentically and the tyranny of respectability: fitting in by making ourselves more palatable, more recognizable to a cis-het society in order to get through the day, escape harassment, and for some of us, just to survive. I don’t pass. I don’t fit into a clean, commercialized narrative of transition. What I love about the story of Rose, is that it is unmistakably disrespectful, pretty tasteless, and entirely me.”

Rose: You Are Who You Eat Spring 2022 Performances

Proof of vaccination is required at all events

Rose: You Are Who You Eat Cast & Crew

Lyrics and some melodies by John Jarboe

Rose began as a commission and presentation from Works & Process at the Guggenheim through a bubble residency at Mount Tremper Arts in Fall 2020 at Bethany Arts Community in Spring 2021. The spring 2022 performances are developed with support from Works & Process, CulturalDC and FringeArts. Rose has also received support from The Bearded Ladies Cabaret via the John S and James L.Knight Foundation and individual donors.

About Works & Process at the Guggenheim

Works & Process, the performing arts series at the Guggenheim, has championed new works and offered audiences unprecedented access to generations of leading creators and performers. Described by The New York Times as “forward-looking” and “an exceptional opportunity to understand something of the creative process,” for 35 years, New Yorkers have been able to see, hear, and meet the most acclaimed artists in the world, in an intimate setting unlike any other.

CulturalDC (est. 1998) supports innovative artists across all disciplines and makes their work accessible to diverse audiences. They provide unconventional space for relevant and challenging work that is essential to nurturing vibrant urban communities. CulturalDC has made a name for itself in providing a platform for bold contemporary artists to interact with audiences in thought-provoking ways. Previous programs include “Insurrection” by Andres Serrano, “Mighty, Mighty” by Devan Shimoyama, “Ivanka Vacuuming” by Jennifer Rubell, and “THIS IS NOT A DRILL” by Jefferson Pinder. CulturalDC owns Source Theatre, a multidisciplinary arts center, and a 40-ft shipping container transformed into a Mobile Art Gallery. Visit www.culturaldc.org for more information.