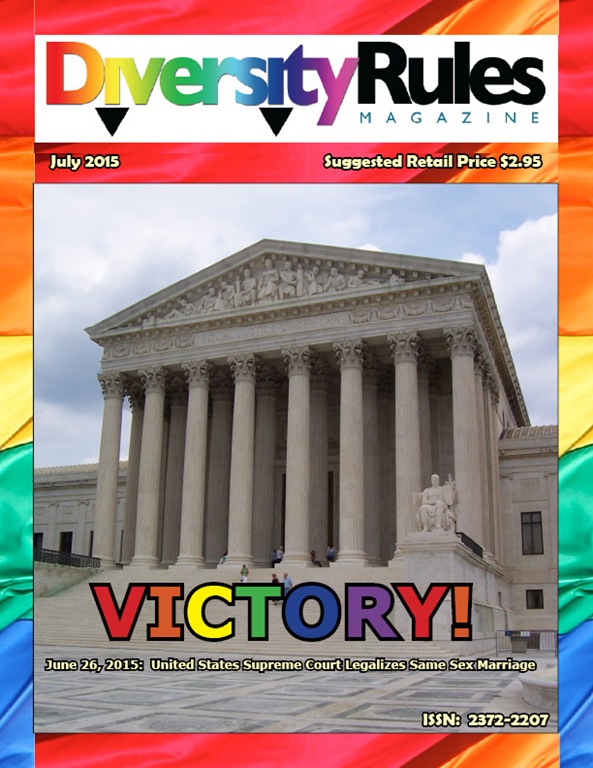 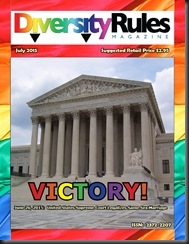 The July issue celebrates the recent victory at the Supreme Court when it legalized same sex marriage throughout the nation!  The Supreme Court voted in favor of humans, not just liberals. It was the right thing to do. This is what this country should be about and that’s what this and the other recent rulings of that historic week were all about — PEOPLE and their dignity — which the GOP seems to have abdicated and lost sight of for whatever reason.

Although marriage equality has come to America it does NOT mean all is well! We still have many battle lines to gear up for. In many states LGBT folks can still be fired, evicted, denied adoption rights and denied services simply for being who they are. Our transgender brothers and sisters are still persecuted, as many of the advancements gained do not apply to them (e.g., open military service). We have lots to do yet folks… LOTS TO DO. Do not tolerate any second class treatment. Keep fighting and do not become complacent.

The July issue contains a number of articles of interest about the recent court decision.

Also included in the July issue:

June Travel: Robert Saladarini’s next travel article talks about visiting Cuba – and NOT the one in New York State either!

Heading to San Diego: The folks from Purple Roofs take us on a trip to beautiful San Diego, California.

As you can see from the sampling above, the July issue is packed full of great information but you won’t be able to read it unless you subscribe, as Diversity Rules is now a subscription only publication. Don’t miss a single issue! Subscribe now at:

Single issues (through the August 2014 issue) are also available as well as an annual digital subscriptions for $2.95 and $4.95, respectively.

Diversity Rules can now be downloaded from the I-tunes APP Store.

The July issue is brought to you by these fine sponsors! Please let them know you found out about them from Diversity Rules Magazine: