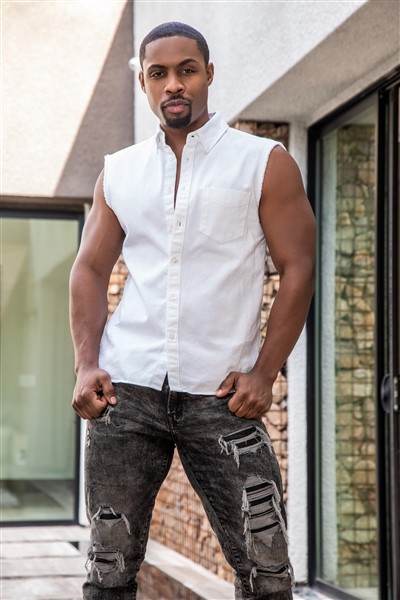 DeAngelo Jackson is the first black man to win a GAYVN Best Actor Award in 2020 and most recently claimed the most coveted GAYVN Performer of The Year 2021 title, from the adult film industry’s equivalent to the Oscars. He started his career in 2009 and is now in his third year as Noir Male’s exclusive contract performer. Jackson was born in Germany, raised in Georgia, and studied Criminal Justice at Florida State University. He entered the adult industry as a way to make extra money in college. Having never been with a man or woman, Jackson lost his virginity on camera. He doesn’t regret any choices he has made and maintains a happy relationship with his supportive family who say they are proud of all of his adult film success.

JRK: Before we get into the interview, can you give readers some background on DeAngelo Jackson? Where you are from, and all that good introductory stuff!

DJ: I am an army brat from Germany! Most people are surprised that someone studying criminal justice, would end up losing his virginity on camera in an adult film. But let’s just say I am full of surprises!

DJ: BBIP is my passion project that I cannot believe is actually complete. Noir Male pulled together many of their most frequently used performers last year around Juneteenth, which is why I wanted the trailer to launch for The new National holiday. The thing about Jon Blitt, who owns Noir Male, is he is about actions speaking louder than words, publicly people were accusing them of not saying anything, not being apart of the movement, but he actually was coming to us directly seeing how they can do better as a company. And he already implemented our requests.

From this dialogue, I heard all of my peers’ concerns, issues, and treatment. I immediately reached out to my manager and Dillon Díaz, my associate producer on the project (who did so much to help bring this to life), and shared with them this idea of telling our stories, revealing the truth, creating a revolution.

My manager and I then pitched the idea to Noir Male and they immediately jumped on board. Rock’s Boys, AVN, Falcon Studios all agreed to help. My entire team and the studios reached out to many many performers to get them involved and we were able to tell this story. OUR STORY!

JRK: How did you select the four men to feature in the film?

DJ: Well technically I’m one of the four LOL. I was forced to be on camera, I really didn’t want to make this about DeAngelo Jackson, but the creative team thought having me involved would help the talent feel more supported and comfortable being a part of this film.

All transparent and I hope I don’t offend anyone, but many documentaries bore me. And I’m not sure my target audience would want to sit through a traditional documentary. My Co-Executive Producer/Director, Dwight Allen O’Neal, and I looked at tons of documentaries, reality shows, Fenty Savage Fashion Show (I mean we are gay men), and P-Valley to determine the feel we wanted.

At that point I reached out to several adult stars to be a part of it, and we got a ton of no’s but 3 of my friends said yes. They were then given the task of creating an authentic few days in their city that we could capture. We didn’t want anything staged. We then got to connect with their friend circle (who mostly work in the business) to capture their day to day life and hear their stories. Some additional people that were added were friends and people we have all admired in the business.

Dwight and the team were literally heading to the airport when Breion Diamond was added to the cast. Dwight called up Breion made him run out and get a covid test and added him into the film. As a veteran we could do this documentary without his insight.

DJ: I trust the process of life. I know every experience I have encountered makes me the man I am today. It is all a part of a master plan for my journey. I am not saying everything has worked out magical, but I keep moving. I strive to make today better than yesterday.

JRK: How much of an impact do you think your documentary film will have on producers of adult films? Have you seen any noticeable change yet, albeit the documentary just came out?

DJ: To be honest it’s too soon to tell. We just released the trailer, however, what I will say is this. The conversation is being had and I’m hopeful. I’m not attacking anyone, we are creating a safe space where BIPOC industry professionals can share their experiences. I hope this lays the blueprint for new safer energy within our field.

JRK: What are some of the reactions you received when you started making the film? Were there some in the industry who were trepidatious, hesitant to speak with you, or fearful of being exposed for using racist story plots and character roles?

DJ: I didn’t think it would be a film. This industry has created an energy of fear. In the beginning, there were a ton of no’s, then a ton of “Hell No’s” then a bunch of “off the records,” and even while shooting sometimes we had to turn the camera off to not reveal too much of someone’s story. This is a very sensitive subject. Many performers don’t want to be blacklisted and I get it, but it’s not fair to have to work and live in a space of fear.

DJ: It definitely did have a huge impact on my career, and I think it shed some light on the careers of my peers as well. I didn’t feel like I was winning, it felt like WE were winning.

DJ: I urge them to watch the documentary to get a glimpse into our industry. I even give a little bit of a history lesson. Perhaps it will allow them to at least respect us, at the end of the day that’s what every person wants. Respect.

JRK: Do you have any closing thoughts you would like to add that is not already covered above?