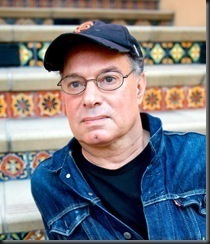 I was impressed and moved when I first met Rev. Megan Rohrer. Megan is the Pastor at Grace Lutheran Church in San Francisco. Megan, who prefers to use gender neutral pronouns, is the first openly transgender pastor to be installed at a Lutheran congregation–Megan always specifies that Megan is “openly” transgender, as not all trans people are out. It’s important, Megan feels, to respect people’s privacy.

I covered Megan’s installation at Grace Lutheran for Bay Area Reporter, then did a follow-up interview with her for SFGN. Every time I hear Megan’s voice, every time we meet, I feel a sense of peace. Megan is a person who’s filled with love for the world. Obviously the congregation agrees, as Grace Lutheran’s membership has seen a sharp increase since Megan took to the pulpit.

Megan is involved in homeless outreach, having many years experience of working with San Francisco’s Night Ministry. Night Ministry’s pastors hit the streets of the City during the after-midnight hours in order to offer prayer and counseling to the homeless, and to help people on the streets find shelter and food. One of Megan’s personal projects is to help homeless people suffering from vision loss obtain free eyeglasses.

“Be the change you want to see in the world,” said Gandhi. Few people I’ve encountered in my lifetime live up to this philosophy more than Rev. Megan Rohrer.

So naturally I was shocked, in late June, when Megan needed to contact the San Francisco police and ask them to keep an eye on Grace Lutheran. Megan had received threats of violence which came from within the LGBT sphere.

“Someone needs to track this dude down and beat the shit out of them,” stated the Tweet which Megan screen-grabbed and posted on her Facebook page. The tweet, from an account called “no name Wiener,” is owned by a transgender woman. As this and other threats directed at Megan came in the immediate aftermath of the church shootings in South Carolina, Megan took no chances.

Megan was targeted due to her efforts to get Meagan Taylor, an African American transgender woman, out of jail. Taylor had been arrested at a motel in Des Moines Iowa on false prostitution charges. Megan was raising funds in order to get Taylor released. The people who threatened Megan wanted the money sent to them.

No less than the Transgender Law Center acknowledged Megan’s assistance in getting Taylor freed from jail, according to the TLC website.  Which certainly proves that the accusations against Megan were false.”

“They were calling Lutheran pastors around the country because I’m ‘stealing money from a black woman,'” Megan told me during our meeting at Grace Lutheran this past week.

I asked Megan if the LGBT community was having a mental health crisis due to the almost endless personal attacks which LGBT people and activists seem to be inflicting on each other. I referenced the classic gay play-turned film “The Boys in the Band,” in which a gay birthday party becomes a cesspool of gay-on-gay hatemongering.

“If only we didn’t hate ourselves quite so very much,” said Michael, the play’s protagonist.

“All of the people who had done these things to me indicated that they had been treated in a similar fashion,” Megan said. “I have deep compassion for their healing process. But their behavior is unacceptable.”

Megan admits there are problems in the LGBT community. “Like all things, there are good people in bad organizations, and bad people in good organizations,” Megan said. “I try to do the best I can to listen to the ways I need to do better, and to actively work on healing my wounds so that I don’t deflect back on others.”

Megan acknowledged to have suffered from PTSD symptoms in the aftermath of the ordeal, pointing out that there are around 177 violent church incidents per year.

“I do a lot of gardening,” Megan said. “I get nervous when people approach the church. I heal with hot chocolates, laughing with friends, stupid reality TV shows, sacred rituals and rocking babies.”

Megan acknowledged that their seems to be a pattern of such behavior in the LGBT community, and that many LGBTs were suffering from PTSD as a result of unhealed traumas brought on by homophobia, inequality and anti-LGBT violence.

We, as LGBT people are the only ones who can heal ourselves. We must decide what kind of a community we want. To that end, Megan and I agreed to organize a community forum on LGBT mental health, tentatively set for February 2016 at Grace Lutheran Church. Our focus will be discussions on the causes of the behavior we’re seeing, and ways we can heal ourselves.

Stay tuned to future editions of this column for more details.

1 thought on “If You Could Read My Mind”