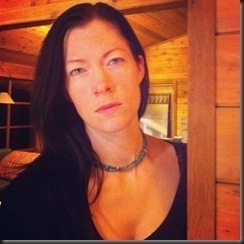 On a day when it’s cold and sunny and I’ve been given the gift of free time, it’s an easy choice to take the kayak out and see what I can find. It feels heavy and awkward after having not done this for weeks, lifting the boat and balancing it on my hip down the boat launch. I go slowly on the wet parts, cautious of a fall, not that it’s ever happened. I have every weekend to myself, and not all of them are rainy. Why has it been so long since I’ve done this?

The water isn’t perfectly clear, but I can see down twenty feet or more through a kind of pale green murk that doesn’t obscure as much as give an odd shape to the things below. My arms are sore from working out and I paddle slower than usual. From the quiet that goes along with my easy pace, I hear a strange soft thump from shore. It isn’t the footsteps of a runner, as I expect. I see an enormous bird crouching over something on the sand, coiling its body to pull great ripping bites with such force that its tail feathers come down with a smack each time it tears a piece loose, making the sound that caught my attention. I listen more carefully, and I can hear the flesh-fabric of whatever lies on the sand held by talons separating and tiny bones snapping. I lift the paddle from the water and sit entirely still, watching, feeling invisible until the bird looks up and then returns to its meal, deeming my presence insignificant.

The boat bumps into the first pier, standing free of any structure in groups of three or four tall posts sticking out of the water twenty feet and extending down into the invisible bottoms, wearing lumpy blue coats of mussels and barnacles. I can see down far enough in the pier’s shadow to watch fish nearly a foot long, fat in the middle and narrow on both ends with black-tipped opaque fins. They flap slowly as they move under the boat, as curious of me as I am of them. When my eyes adjust and the surface becomes still, I can see that the pale orange shadow alongside the poles isn’t distorted light; it’s a school of long, skinny fish, sunset-colored, all moving at the same speed and in the same direction. I wonder why the bigger fish aren’t eating them.

Crabs perched on stiletto-heel claws over the mussels, shells deep red like a pomegranate, others draped in algae, sit perfectly still, just like the sea stars further down, splayed across the naked lower lengths of the post where tides never reach. Some of the sea stars are hunched around themselves, legs tucked in, and I watch closely through the green shadow-water, hoping what I’m seeing is the purple flex of an octopus, but it remains still, and the boat drifts further, bumping into the next post.

The visible geometries of a jellyfish, nothing more than a hoopskirt of translucent structure with four golden eyes in its center, moving with a slow, steady pulse through the water, passes under the place where my paddle hangs from the edge of the boat, dripping. I want very much to put my finger into the water and touch the creature that looks like nothing at all, to feel the nothingness of it. But I don’t.

The next group of poles the current carries me to is a confusing inversion of the sky above: clouds below, clouds overhead. Giant frilled anemone stick out unevenly from the poles far down below, visible through the murk because of their brightness. I can see both worlds suddenly, and neither looks entirely real. The sky is green with clouds, the water is blue with clouds, and again I want to put my hand in the water, through both worlds, connect them somehow.

But I don’t need to.  A living link swims straight for me. The tiny pop of the world below breaking through makes me turn quickly, quietly, and I see the slip of a wet tail glide back under the water’s surface, then whiskers and bubbles on the blue-sky reflection and two otters slide across the space between the poles and my boat. One tosses its head back and chews noisily, oblivious to the laugh I didn’t catch in time, answering with a little grunt when its finished eating whatever it was that needed chewing. Its pal comes back over and the two roll along the surface with bumps and hitches that remind me of the gait of a dachshund puppy running fast.

And then I feel myself starting to clutch all of this, the eagle on the shore, the creatures on the poles, the otters and the sunshine, trying to keep it always. This moment is in my hand, I can feel it, and I’m crushing it instead of letting it float free and land somewhere inside where it won’t just disappear when the rain comes and I’m sitting in my car, stuck in traffic.

I breathe in the present and paddle away from the eagle, resisting the urge to follow the disappearing backs of the otters as they move off in search of more interesting company.