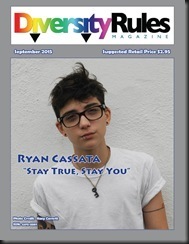 The Long Island-native who is now based in San Francisco, can play many instruments but is most frequently seen performing foot-stomping folk rock with a vocal mic, a harmonica slung around his neck and his beloved Ovation guitar. As a one man show, Cassata never leaves an audience bored.

Ryan Cassata writes very passionate lyrics. His words are positive and inspirational to every generation. Cassata hopes to continue living the dream of spreading this positivity across the country and around the world with efforts to make people smile and catch on to kindness.

Ryan Cassata is doing much more than the average young folk-singer. He demands peace, he demands love, and…he demands REVOLUTION.

Ryan Cassata also recently turned down an offer to appear on AMERICAN IDOL. Ryan explains why in his interview.  He will also give us his perspective on other important topics impacting the transgender community.

JRK:  Can you give Diversity Rules readers an idea of who Ryan Cassata is — where you are from and all that good basic information?

JRK:  Recently you made news with your rejection of American Idol’s offer to appear on the show.  Can you enlighten readers about the issue and what transpired that led to your decision to decline the show’s offer to appear?

RC:  American Idol first contacted me in 2014. I am not sure how they found me but I’m guessing through my youtube channel since that has the most subscribers out of any of my social media. They got in touch via email through my manager the night before the San Francisco auditions and I figured “hey, I might as well give this a go, I have nothing else going on tomorrow.”

The things that the casting director said on the phone were extremely racist, sexist and transphobic. They admitted that American Idol is a TV show and not a singing show.

JRK:  You have been in New York recording your next album in collaboration with Barb Morrison – who, by the way, was a guest feature in Diversity Rules and simply ROCKS!  Can you tell us about the new album?

RC:  The new album is different than anything I have ever done. It contains a wide range of genres from rap to pop to rock with a punk rock edge. A lot of the songs focus on staying true to oneself, standing up for what you believe in, rising up against bullying, rising up against drug and alcohol addiction, and positive change. There are also a couple love songs. I also did two cover songs one is “Round Here” by the Counting Crows and the other is “Man In The Mirror” made famous by Michael Jackson. Working with Barb Morrison and Jonathan Jetter was a privilege. It was such an incredible experience where I was pushed above the limits. My singing voice improved throughout the recording process and so did my songwriting. I wrote a couple of the songs while I was in the studio, which is a totally new experience for me. My drummer Kenny Truhn (from my records The Theme of Humankind, The Rhythm and Soul Sounds) came in on the drums for this record and the chemistry between us was as strong as ever. I’ve already filmed a couple music videos for the record and plan to film more. I can’t wait for the world to hear my new album.

JRK:  Transgender is a term we are hearing a lot more of lately with the recent “coming out” of Caitlyn Jenner as well as other noteworthy news stories over the past month dealing with transgender youth.  There is still a misunderstanding of what the term encompasses.  Can you provide some insight into what you think it means?

RC:  Everyone’s definition of the word transgender is different. For me it means, feeling differently than the gender you were assigned with at birth. Specifically, for me that means transitioning from female assigned at birth to male because I have always felt male. I think there’s a lot of misunderstanding that gender is binary, when it isn’t. Gender is more than just male and female. Also, not all transgender people choose to have surgeries and/or hormones and that’s an important thing to note. Surgeries and/or hormones do not make a transgender person valid, they are already valid.

JRK:  Being gay or lesbian is a traumatic experience for a child in terms of the reactions by peers.  The trauma that a transgender youth must endure has to be much more intense.  What was your experience as a trans youth coming to grips with who you truly were?

RC:  I always had a strong sense of who I was so when I was younger and I knew that coming out was the right thing for me to do. I went through a lot of bullying in middle school and high school. I also was physically assaulted when I was a young teenager. I had to explain to everyone around me what being transgender meant because most people had never even heard of it.

JRK:  What are some of the most important things we can tell our youth generally about their individuality?  What can be done to encourage them to embrace it and be proud of who they are despite a society that sometimes degrades a person’s individuality.

RC:  Every single person is different. However, there are people just like you out there in the world. You are not alone, you are never alone. No matter how you identify, your identity is valid.

JRK:  What was the reaction of family and friends when you actually embarked on your transition?  What did you do to facilitate their processing of what was about to happen in terms of your journey forward?

RC:  My friends were all very supportive and they told me that they had been waiting for me to come out to them for a long time. They weren’t surprised at all when I told them.

My family took a bit longer to come around. My older brother, Vincent and my younger brother, Frank always accepted me. There was some struggle with understanding but they were always willing to learn. My parent took a little bit longer, especially my Dad but now both of my parents support me 100%. My extended family sometimes still struggles but it is much better than it was.

JRK:  What are some of the misconceptions about transgender people that need to be dispelled?  How is that achieved?

JRK:  What’s coming up next for Ryan Cassata?

RC:  My album will come out sometime this year and then next year the short film that I co-starred in will be coming out. It’s called Beemus: It’ll End In Tears.