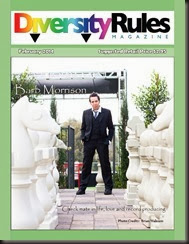 The February issue of Diversity Rules Magazine has been released featuring Barb Morrison.  In addition to Barb’s interview, the following is a partial listing of what’s coming up as well in February:

Keep Up Now: Terry Ludwig talks about being at a crossroad in life.

Book Feature::  I Am Me by Patrick Dati.  Patrick’s book promotes an increased awareness of child abuse and bullying.

The Gay Advocate:  A new column by Attorney-At-Law Dov Treiman.  His first installment is entitled, “If There’s a Will, There’s A Way.”

Remedies:  Donny Winter returns with his thoughts on turning pain into power.

As you can see from the sampling above, the February issue is packed full of great information but you won’t be able to read it unless you subscribe, as Diversity Rules is now a subscription only publication. Don’t miss a single issue!  Subscribe now at:

The February issue is brought to you by these fine sponsors!  Please let them know you found out about them from Diversity Rules Magazine: