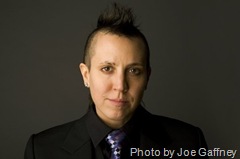 Diversity Rules Magazine is honored to feature Barb Morrison in the February issue.  Barb, who identifies as bisexual, is an American recording artist, Top 5 Billboard dance chart songwriter, and Gold record producer.  She is best known as a producer for numerous artists such as Blondie, Rufus Wainwright, L.P. and as one half of the production duo Super Buddha.

Barb was born in Schenectady, New York.  After beginning piano at age 7 and saxophone at age 9, Barb joined her first punk band as a drummer at age 14. She bought her first guitar for $15.00 at the age of 17 and moved to New York City later that year to pursue a career in music.

Barb is currently producing records and film scores in her Brooklyn, New York studio. Recent projects include upcoming releases by Blondie and The Cliks, as well as a number of songs featuring Grammy-nominated mixer Tony Maserati.

JRK:  Can you give Diversity Rules an idea of who Barb Morrison is, a bit about your background and how it impacted the person you are today.

BM:  I was born in upstate NY and raised by three men (my 2 brothers and my father). My mother had a night job so I didn’t see her very much. I left home at 17 and moved to NYC with $1000, a guitar & a saxophone. That was the mid 1980s. I’ve been living in NYC since then so I was basically raised on the streets of New York. Back then things weren’t as tame as they are now in the city. You truly were in a war zone just walking down the street. Alphabet city was always on fire in the 80s. We all lived in these burnt out buildings and had to watch our backs constantly. It was like the urban wild west. I love that old NYC is a part of me. I feel really lucky that I got to experience all the music, art and fashion as an impressionable teen. My first week in NYC I saw Salvador Dali hailing a cab on 7th Ave and I thought to myself “yeah I can live HERE.”

JRK:  You were born in Schenectady, NY.  What was it like growing up there?  As is the case with many upstate NY communities it must have been somewhat provincial and suppressing at times.

BM:  Upstate NY is obviously not the same as NYC. I also lived in florida for 4 years in my early teens. Both of those places never felt big enough for me. I remember watching David Bowie with Klaus Nomi & Joey Arias on Saturday Night Live perform boys keep swinging in full drag when I was 11 and thinking to myself “ oh wow. Im NOT crazy” immediately followed by “I don’t know who these queens ARE but I gotta get outta here and FIND them !”

JRK:  You identify as bisexual.  You stated that you don’t really like the term.  Why is that?

BM:  It’s funny someone asked me the other day and I said I was “VERY bisexual” but then I realized that’s not even true cuz the term Bi means “two” and I believe there are more genders than two on the spectrum. If we’re gonna be picky about it I’m probably more like pansexual. But sure I’ll use the term bisexual to a broader audience. It does feel limiting though.

JRK:  Many people deny the existence of bisexuals in that there is a belief that a person cannot truly be sexually gratified by both male and female partners.  What is your impression as to why some folks think that way?

BM:  (laughs) well I’m here to tell you we can ALL be gratified by male, female and trans partners. If you don’t believe it, go do some experimenting and come back and tell me how much fun you’ve had! I really think people have a need to label themselves to feel like they’re part of a community. I see it happen all the time in the gay community. There are so many closeted bisexuals that call themselves gay because it’s a much more acceptable label.

JRK:  A group of bisexual activists from around the country gathered at the White House on September 23, 2013 to meet with administration officials and representatives of LGBT organizations to discuss issues important to the bisexual community.  What are your impressions of this historic gathering and do you think it had some impact on furthering awareness of what it means to be bisexual?

BM:  Oh I was so into this when it happened. I wished I was there with them! The fact that President Obama said not only the words “gay and lesbian” in his inaugural speech but he also said “bisexual and transgender” and said those words in a positive way was monumental for everyone. Some straight Republican father in Wyoming had to answer his kids question when they heard that; “Daddy what’s bisexual and transgender mean?”

I LOVED IT! Keepin it real!

JRK:  What advice would you give to someone grappling with their bisexuality?  What resources are available to help?  On a more personal scale, what did you find useful when you were coming to grips with your gender identity?

BM:  Im sure the internet helps kids find communities way easier than we were able to back before we all had computers. It was definitely a grapple coming out as bisexual for me. I had identified socially as lesbian in my late teens but that never felt right either cuz I was somewhere on the trans spectrum. but It was the only community that I felt welcomed in so I went with it. I was in a band and picking up guys on the road, groupies and stuff but I’d never dare tell my lesbian friends back in NYC cuz they’d have judged me hard. Looking back I guess I was a closeted heterosexual for a while! (laughs). Nah I always knew I liked all genders. My first romantic experience with a transwoman was when I was 14 so I realized at an early age that putting myself in a box wasn’t gonna cut it. In the mid 90’s I met a beautiful gay guy and we fell deeply in love. He hadn’t been with a female bodied person in over a decade but we just clicked and it was magic. All our gay friends gave us such a hard time about it. It was ridiculous. But after a few years they saw how perfect we were together and hopefully it opened some minds. My advice to anyone struggling with it is – just be yourself. Fall in love with PEOPLE not genders or what’s between someone’s legs. You’ll be much more at ease with yourself if you just let it all happen and try not to judge it.

JRK:  You have accomplished many notable achievements in your music career.  Tell us about some of your more enduring legacies and what are you most proud of?

I’m mostly proud of the fact that I’ve survived as a working musician for this long in this crazy city. The music industry has its ups and downs so anyone just paying rent and eating is already succeeding!  I’ve done so many things I feel grateful to have been a part of. Working with Blondie, Rufus Wainwright, Antony & The Johnsons, LP, The Cliks, etc. have all been such a blessing. Just to be involved with ANY of their vibrations is true honor. But mostly I wake up everyday and even if I’m exhausted I say “oh right, I love my job. I love my life” and I’m able to get up outta bed and be enthusiastic about the day ahead of me. I never ever take for granted how lucky I am that people trust me with their music.

JRK:  You ventured off to a solo career and then wrote and produced 3 songs for Blondie.  That must have been quite exciting!

BM:  I’ve been working with Debbie on her solo music since 2005 and got a gold record producing Blondie that same year so it seemed kind of obvious that when I left Super Buddha (the production team I was in for ten years) that she’d bring me in for more Blondie stuff. Those songs were amazing because all three were totally different and an extreme left turn for them. But they’ve always been that type of band. They never fit into any mold whether theyre doing new wave, punk, disco, hip hop, pop, etc. I’ve been working with her and them on and off since then. It’s always exciting. Debbie is someone who constantly pushes the envelope. She’s always trying new things, listening to new music and taking chances.  She’s younger and more cutting edge than most 30 year olds I know.

JRK:  What’s Barb Morrison up to currently?  What can we expect to see from you in the future?

BM:  I scored a movie called “Concussion” last year and will be collaborating on a new film with that director Stacie Passon as well as producing some super cool EPs for a pretty diverse group of bands in the next few months. Everything from post punk to neo soul. Im such a lover of music so it feels good to be able to work on film scores as well as producing records.

Listen to your own voice. Don’t fit into any boxes. Be yourself. Reach out so you can help each other go through whatever you need to go through. but most of all be honest – to yourself and to others. Whats the mark twain quote? ”If you tell the truth you don’t have to remember anything.”

For more information about Barb go to her website at:
www.barbmorrisonmusic.com.

She also has a great wikipedia listing at:
http://en.wikipedia.org/wiki/Barb_Morrison.

There is also a GREAT video about Barb and her extraordinary producing abilities at:
www.youtube.com/watch?v=Nn84HGry_D4.