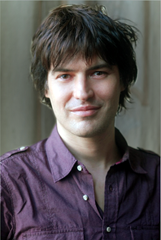 Actor/performer and writer MICHAEL CAVADIAS graduated from the Experimental Theatre Wing at the Tish School of the Arts where he studied with the likes of Andre Gregory and went on to perform with Mabou Mines E.T.C., Blacklips Performance Cult (founded by Antony of Antony and the Johnsons). He developed the character, Claywoman, at Blacklips and then with Mabou Mines as a part of their resident artist program. He has acted in many films, including Wonder Boys (alongside Michael Douglas and Robert Downey Jr.), Seeing You In Circles, and Gypsy 83. Television appearances include New York Undercover, Third Watch & others.  Michael fronted the rock band Bullet who’s songs were featured in the film The Safety of Objects and he is currently a featured performer with the acclaimed political cabaret The Citizens Band. He recently wrote and performed as Claywoman in The Mystery of Claywoman (Directed by Rob Roth) at Deitch Projects, The New Museum for Contemporary Art, The Wild Project and opened for Antony and the Johnsons at Town Hall.   He recently traveled to the UK to perform a new work (Conversations with Claywoman) at the Meltdown Festival, curated by Antony.   Upcoming projects include the short film “Junkie Doctors” directed by Rob Roth & written by MIchael Cavadias, & an appearance in the “Caveman” music video for “In the City” with Julia Stiles.  Michael will also be playing “Kelvyn” in the 1st episode of the next season of Girls on HBO.

Michael is also a DJ.  Michael plays a mix of rock, pop, 80’s, disco, funk, alternative & electro. Residencies include Marquee, Greenhouse, Juliet, Goldbar, the Ace Hotel, Lotus, Soho Grand The Garden of Ono, La Esquina, Hotel Chantelle and many other top venues. Recently, he was the DJ for Rufus Wainwright’s record release party at The Gramercy Park Hotel, Alan Cummings Halloween party at Soho Grand and Boy George’s birthday party in London. He has played parties for Estee Lauder, MTV, phillips de pury, PAPER magazine, & LifeBall in Vienna. In London he has been a guest at Caligula, Slave to Fashion, and The Dalston Superstore.

For more information about Michael go to: