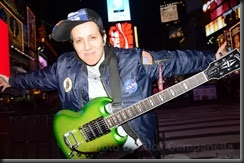 Diversity Rules Magazine is honored to feature Barb Morrison in the February issue.  Barb, who identifies as bisexual, is an American recording artist, Top 5 Billboard dance chart songwriter, and Gold record producer.  She is best known as a producer for numerous artists such as Blondie, Rufus Wainwright, L.P. and as one half of the production duo Super Buddha.

Barb was born in Schenectady, New York.  After beginning piano at age 7 and saxophone at age 9, Barb joined her first punk band as a drummer at age 14. She bought her first guitar for $15.00 at the age of 17 and moved to New York City later that year to pursue a career in music.

Some of her more notable accomplishments include:

In 1987, she joined the band ‘Gutterboy’ as a saxophone player, guitarist and back up singer.

In 1992, she left Gutterboy to start the band “Itchy Trigger Finger” with longtime friend Harry Nagle.  From 1995-1998, she was also the sax player and guitarist for the Squeeze box house band at Don Hill’s.

In 2000, Barb scored her first film, The Safety of Objects starring Glenn Close. She also wrote a song titled “Kiss It All Goodbye” for the movie with L.P., and later that year co-wrote and produced three songs, including the title track, for L.P.’s debut album Heart-Shaped Scar.

From 2000-2012 Barb made up half of the record production duo Super Buddha.

In 2012, Barb left Super Buddha to pursue a solo career. Her first endeavor was writing and producing 3 songs for Blondie.  That same year she composed the film score for the movie Concussion.

In 2013, music that Barb produced for Rayya Elias’ book Harley Loco was presented by author Elizabeth Gilbert at the Detroit Institute of Arts, following the release of the book and accompanying soundtrack by Viking Press.

Barb is currently producing records and film scores in her Brooklyn, New York studio. Recent projects include upcoming releases by Blondie and The Cliks, as well as a number of songs featuring Grammy-nominated mixer Tony Maserati.

More information about Barb can be found at: