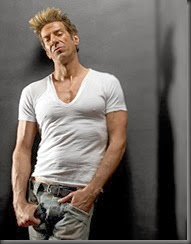 Butch Cordora was born in upstate Pennsylvania and moved to Philadelphia in the late 80’s and has been there ever since.

When he started his career in the arts it came in the form of acting. Having a background in theater and film, he spent most of the ’90’s being an extra in films such as “Philadelphia,” “12 Monkeys,” “Sixth Sense,” “Jesus Son,” and “Unbreakable,” as well as commercials, plenty of theater, some print work and even a stint on QVC.

After a while, Butch became bored with the humdrum and decided to look into getting his own talk show. He started developing a professional proposal and shopped it all over Philly. There was no public access in Philly and he had to be creative to get his proposal out and about.

Then lo and behold, Drexel University’s TV Station gave him the green light and “In Bed With Butch” became a reality and was a successful fixture in Philly for over 10 years.

After “In Bed With Butch,” Cordora finished his 1st feature film (Straight & Butch) in 2010, and in 2011 got a distributor deal. It’s selling great all over North America through various distribution networks.

He was in a 2nd feature film this year that’s still doing the festival circuit. It (and he) went to Sundance, Berlin, Dublin, SanFran and LA (so far).  He is now looking for a distributor.

The final “leg” of his exhausting Straight & Butch project is finally coming to a close in the form of a big, over-sized, coffee-table photography book! (Calendar/movie/book).  He then is putting the entire concept to bed. He is up to 25 models and in a sentence he says it’s  his “millennium’s answer to Madonna’s SEX book”!  (he is looking for a publisher .. hint, hint).

His latest project has the potential to make national news!  In Feb he is going to be running the 1st ever Gay Texas Hold ‘Em tournament in an actual casino!  Check out the December issue to find out more about that!

Don’t miss the December feature and much more!  Subscribe to Diversity Rules Magazine TODAY at: