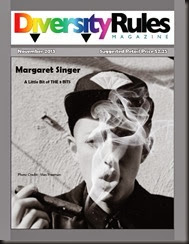 The November issue of Diversity Rules Magazine has been released featuring Margaret Singer.  In addition to Margaret’s interview, the following is a partial listing of what’s coming up as well in November:

Keep Up Now: Terry Ludwig talks about how our thoughts influence us.

You Are Not Alone:  A newcomer to Diversity Rules, Jase Simpson talks about God and how we are never alone.

Reflections On the March:  Adrian Shanker provides his perspective of the March on Washington.

The Amazon Trail: Lee Lynch’s next installment entitled, “The Gift of Being Out.”

Marketing to the LGBTQ Community:  Jenn T. Grace talks about her step-by-step guide to effectively market to the LGBTQ community.

Remedies:  Donny Winter returns with his thoughts on “love.”

As you can see from the sampling above, the November issue is packed full of great information but you won’t be able to read it unless you subscribe, as Diversity Rules is now a subscription only publication. Don’t miss a single issue!  Subscribe now at:

Diversity Rules can now be downloaded from the APP Store and from the Android Market.

The November issue is brought to you by these fine sponsors!  Please let them know you found out about them from Diversity Rules Magazine: