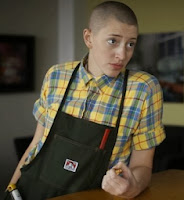 The 3 Bits is the brainchild of the writing/directing team Max Freeman and Margaret Singer, a pair who met in Boston where Margaret was a budding photographer and Max was working on a PhD in literature at Harvard. What both really wanted, though, was to make movies.

So Margaret set down her lens and Max dropped out of his program, and the duo took a month off to write a feature-length script. Upon completion, they were confident someone would produce the film because it was, well, bad-ass. However, two years later, with the screenplay still stuffed under a mattress, they realized that with zero training in film and no industry connections, they were never going to sell the script. They could either go to film school or start making movies themselves.

The 3 BITS is their first go at movie-making and it has become part of a new revolution of television where it’s no longer only a question of where viewers can watch the show (on computer or TV) but how they watch it.

The 3 BITS follows the erratic lives of the three Bit siblings, Henry, Roman and Madison.

“Way back in the nineties, you could only watch a television show when it was on the air,” says Singer. “Then came Tivo where you could tape the show and watch it at your leisure. Now, thanks to Netflix and Apple TV, people can binge-view shows and watch an entire season in one sitting.”

The 3 BITS takes viewer control even further. While most series still unroll from pilot to finale, The 3 BITS lets viewers choose how to experience its world.

Shot from the perspectives of each of the siblings, The 3 BITS is, in effect, three shows that unroll side by side. If a viewer wants to watch Henry’s episodes and not Madison’s, that’s fine. Or they can watch only Roman’s or Madison’s shows. But if they want a panoramic view of the entire Bits family, they can watch all three. The freedom is part of the fun, and it’s something the internet does better than TV.

The shows do share one important commonality. All are set in Brooklyn. “It was a no brainer to set the show in Brooklyn,” continues Singer. “We live there, we love it. Brooklyn is enormous and diverse.”

“We’re not trying to teach any lessons here,” says Singer. “We hope people enjoy the show. If they learn a thing or two about friendship, kindness, or how to run a successful drug cartel, that’s just icing.”

Don’t miss the November feature and much more!  Subscribe to Diversity Rules Magazine TODAY at: