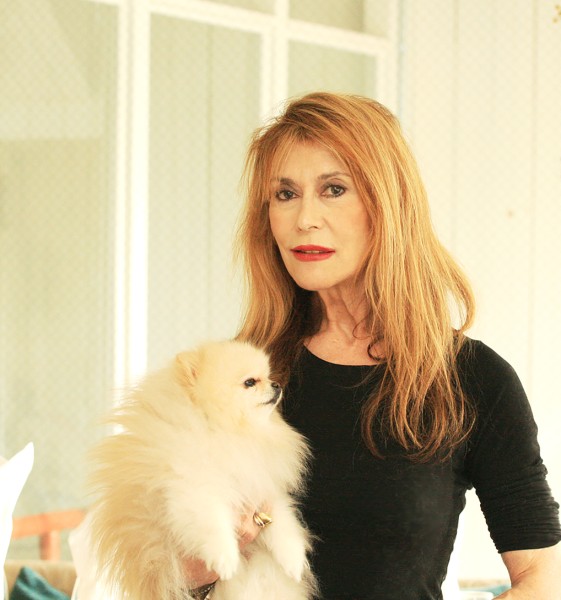 Jani Allan is remembered as South Africa’s first celebrity journalist. She joined the Sunday Times in 1980. Soon, she had the highest readership on the newspaper which had a circulation of some four million.

Jani was raised in Johannesburg’s privileged northern suburbs and read Fine Arts at the University of the Witwatersrand. As well as her writing career she was a concert pianist, exhibiting artist, fashion model, high school teacher and part-time closed circuit TV producer. She married Gordon Schachat, co-founder of African Bank and one of South Africa’s most pre-eminent art collectors.

In 1987 she was named the ‘most admired’ person in South Africa in a Gallup poll that was commissioned by her newspaper. The following year she moved from the champagne social circuit to the only arena that had real importance – the political one. As the pulse-taker of the politico, psyche-analyst of the powerful, her Face to Face profile column saw her interviewing the likes of Mangosuthu Buthelezi, Pik Botha, Magnus Malan and Beyers Naudé.

Most recently Allan has contributed to several South African titles such as the Daily Maverick, Big Issue, Fair Lady and Dekat.

JRK: Can you tell us a bit about your background, where you are from and all that other good stuff?

JA: The circumstances of my birth are shrouded in mystery. I was given away like a puppy and could fit in a shoe box. My adoptive father was a Scot. He was an evolved soul to have chosen me. He left Edinburgh for South Africa where he was chief sub-editor of The Star in Johannesburg. My childhood was a parade of gym khanas and piano recitals. My mother was an antiques dealer. She had horreur de vacui – horror of empty spaces. Persian carpets were layered upon each other at our Bryanston home.

JRK: Your new book entitled, “Jani Confidential” was released in 2015. Can you tell us a bit about the book and why you wrote it?

JA: Bridget Impey from Jacana Media called me from the Frankfurt Book Fair and said ‘It is time for 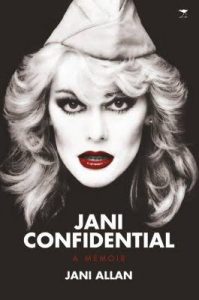 Such an invitation is impossible to refuse. I have had a tumultuous life. Glamour, wealth, achievement, fame… and then my apartment was bombed and kismet came hurtling towards me at full-throttle.

I am now living in a blaze of obscurity in a mink and manure river town in New Jersey. You can’t make this stuff up. Besides, I have no relatives and neither do I have children – well not the two-legged kind – so the book is ‘spoor – evidence that I existed.

JRK: You are doing a one woman show at The Raven in New Hope, PA based upon your book. Can you tell us about that and how that came to be? What other venues will you be taking the show to?

JA: Sandra Prinsloo, one of the most respected actresses in South Africa approached me when I was on the book tour last year with the idea of doing a one-woman show based on the book. There’s a producer and director tapped for the production ‘Jani’.

This year at a couple of book readings, Steven from the Raven reached out to me. I am still marinating on the production. Someone also wants me to do something at the Bucks County Playhouse. But you know hot it is. After a couple of glasses of Veuve people promise one anything. We will see.

JRK: You have been known to say that the two greatest tragedies in your life are that you weren’t born gay or Jewish. How about gay AND Jewish?

JA: Gay AND Jewish would be close to winning a sort of genetic lottery.

I am Jewish (by grace) as I was married to a man that happened to be Jewish. I was living in Linksfield and fully immersed in (secular) Jewish life. My columns were sprinkled with Yiddish and I was writing about Taubie Kushlick and Tony Factor. Truth be told, I was too busy being famous to consider conversion. Decades later I am discovering more about Judaism as a faith. Israel is my dream destination.

JRK: You are an ally of the LGBTQ community and have a large gay following in that some have called you the Queen of Queer in South Africa. Why do you think you have such an appeal to so many in the queer spectrum?

JA: The world sometimes (and with great arrogance) likes to divide the world into two camps: the normal and the abnormal. Those in the ‘abnormal’ camp are liable to be dismissed with quizzical ‘How weird.’

This is the denial of the ‘abnormal’s’ legitimacy and humanity. Public opinion, like treason, is a matter of dates. Think of Oscar Wilde put in gaol!

Perhaps because I am a loner, on some level I ‘get’ the struggles of the LGBTQ community. And I salute them for their courage. I think they know that.

JRK: In 1987 you were named the “most admired” person in South Africa.” That must have been exciting! Can you tell us a bit about that designation?

JA: At the time I was thrilled. I had blonde hair, ten perfect red nails and a Ferrari. I lived for my column and for public recognition. I was shallow as the enamel of a tin tray. (Only fools don’t judge by appearances!) I was a fashionista before the word was invented. I wore Prussian blue lips before Kylie Kardashian was born.

These days I walk around the village with my three American daughters (Pomeranians) without makeup.

JRK: Your interview with Eugene Terre’Blanche of the Afrikaner Weerstandsbeweging led to your leaving South Africa in 1989 because a bomb blew up in your apartment. Can you tell us about what the AWB is and what led to such a horrific event?

JA: The political situation in South Africa was – and continues to be – a tinderbox. I had a platform – every week on page three of the biggest paper in Africa – so I could wield a certain influence. I had to be shut up. It transpired – read the book! I was under surveillance by several intelligence agencies.

My Sandhurst apartment was bombed by the lunatic fringe (I was in it at the time). Their original plan was to kill me with a crossbow.

JRK: You are a well known freelance journalist and you have had much success with your columns. What are some topics you have written about? What were some of your favorite stories you reported on?

JA: Ray Joseph congratulated me on setting the news agenda in South Africa after I published a slut-shaming column for the Daily Maverick that took aim at Ferial Haffajee.

My column about Oscar Pistorius taking acting lessons went viral. Media from all over the world – were desperate to talk to me about that.

I feel very strongly about giving a voice to the voiceless. I wrote another story that went viral about Melissa Bachman, the American huntress. I do what I can for animals – I’ve been doing this since I had a radio show on Cape Talk. And of course I will do what I can for the LGBTQ community.

As a writer I am looking for a variety themes. In last month’s issue of The Big Issue I opined on barefoot hipsters in Cape Town. I have written about ‘Conversation Envy’ for Fair Lady.

JA: I remind myself every day that: 1) You can’t walk on water unless you get out of the boat.; 2) We must endeavor to be strong and courageous and embrace the unknown; 3) Never drink inferior champagne. Life is too short.

1 thought on “A Chat With Jani Allan”