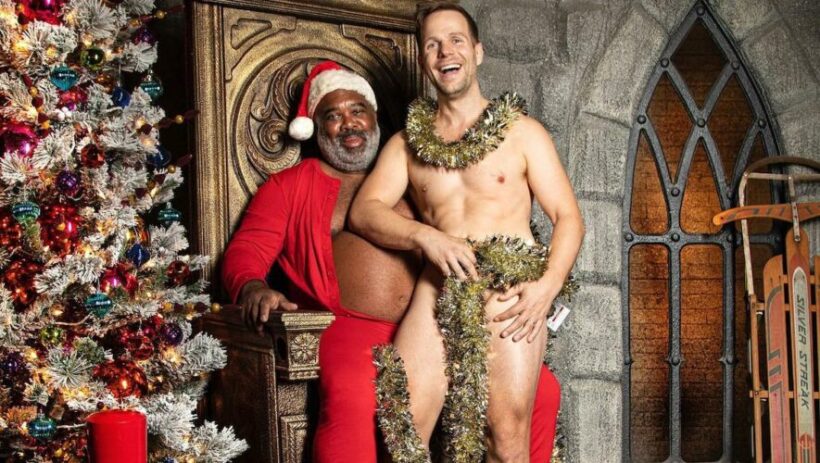 The following interview was graciously provided to Diversity Rules Magazine by Noel Hoffman.

Much of Tom Goss’ youth was spent focused on his studies and on wrestling. He says he didn’t feel much in the way of sexual and emotional desires growing up. In fact, he didn’t go on his first date until he was 22, while in seminary, training to be a Catholic priest.

That was when Tom realized he did have an appetite for sex, only it wasn’t towards women or even the men that society deemed as handsome. His attraction was toward plus-sized furry men.

Many of his biggest pop hits today are odes to them, and his latest album, his first-holiday ep, pays homage to the world’s biggest and most famous papa, Santa Claus. The album is called Big Fat Gay Ass Christmas and it includes spirited songs like “Santa Slay,” “Put that Ass in Christmas,” “Sassy Santa,” and “Ho Ho Homo.”

Joining Tom on the EP are some of the biggest names in gay hip-hop, gay rock-and-roll, and gay country music. His frequent collaborator, de ROCHE, appears on “Ho Ho Homo,” bringing the song to life with vocals that sound like a group of carolers on a doorstep. “De ROCHE and I have been making music together for over a decade,” Tom says. “I want her to be a part of everything I do until the end of time.”

Benjamin Koll sings on “Sassy Santa.” Tom admits to having a huge crush on Benjamin. “I love the joy and positivity he brings to the bear community,” he explains.

Tom Goss’ hope is that Big Fat Gay Ass Christmas makes people laugh and smile, then strip down to their undies and dance. “That’s the Christmas I’m most looking forward to this year!” We sat down with him in his Los Angeles home.

How did you land the name Big Fat Gay Ass Christmas for your holiday album?

Tom Goss: I really wanted to write something that was fun, celebratory, queer, and unapologetic. Big Fat Gay Ass Christmas hit all the markers.

Though the EP is tongue-in-cheek, there seems to be a serious side to the record.

Tom Goss: I have spent a lot of my life censoring myself. Censoring what I say, what I write, how I dress, what my music sounds like, and so much more. It’s been a constant state of second-guessing, carefully carving out a life that is unoffensive, in hopes that everyone will love me. But that’s not real.

Is Christmas your favorite time of the year?

Tom Goss: I love Christmas but truthfully, I like all seasons. I don’t really have a favorite. I’m generally pretty happy and excitable in my day-to-day life. I’m really just happy to be here.

What’s the best Christmas gift you received from Santa?

Tom Goss: I got a Nintendo one year! The original NES. That was amazing! I spent many long days in the house playing Mario, Zelda, and Mortal Kombat.

Growing up, did you have a favorite Christmas carol?

How do the songs on Big Fat Gay Ass Christmas compare with “Wonderful Christmastime?”

Tom Goss: Sonically, they are very different, however, they are similar in that they look at Christmas through a modern lens. They take modern experiences and turn them into songs.

Do you have a favorite on the album?

Tom Goss: Honestly, it’s hard to pick. Depends on the day. Each song on the record is so different, and perfect for a variety of moods. Every song makes me smile, and for me, that’s the most important thing.

How did you assemble all the gay celebs for this album?

Tom Goss: I’m grateful to have collaborated with so many artists over my sixteen-year career. Because of that, I had a lot of these folks in mind while writing the record. Once I made the demos, I reached out to them and asked if they might like to be involved. Luckily, they were all into what was being created.

Who will you celebrate the holidays with this year?

Tom Goss: I haven’t decided yet! I’d like to see my family but they’re so far away. I’ve been traveling for shows a lot lately and the idea of staying home seems mighty appealing.

What is your New Year’s wish?