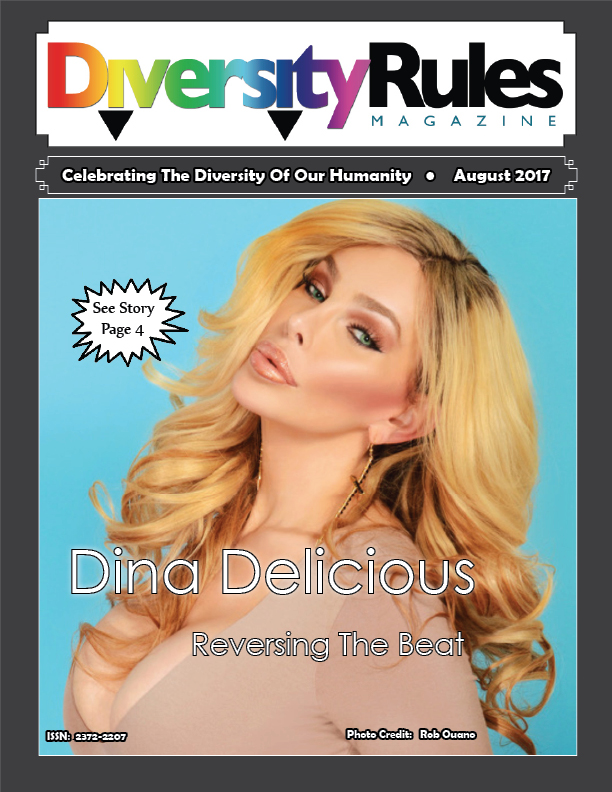 Dina Delicious is an NYC-based transgender nightlife personality and recording artist and actress. She grew up in a single parent home in Bensonhurst Brooklyn with her mom and brother.

Her earliest music memory is of her mom dancing around the house while listening to Donna Summer. She recalls being fascinated by how music could stir all kinds of emotions. Dance music became an escape from the neighborhood bullies for young Dina. Then, as a teen, she attended Manhattan’s High School of Performing Arts which led to Dina discovering a downtown nightlife that offered her an even larger sense of freedom. She underwent dozens of surgeries to become the buxom art form she is today, and alongside Amanda Lepore and Bianca Del Rio, whom Dina counts among her closest friends, she became a staple in the velvet rope scene.

As a trans artist, she is waging a fierce battle across many different fronts: the fight for proper healthcare, housing discrimination, education, and “the right to go to the damn bathroom.”

Her wish is that everyone in the LGBTQ community would come together.

JRK: Before we start the interview, can you tell readers a bit about yourself, where you came from and all that good background stuff?

I’m a very proud New Yorker and grateful for all it has given me, I’m fun wild and unpredictable and fun

JRK: You have released a new single entitled, “Reverse The Beat.” Can you tell us about that and what motivated you to do the song?

DD: “Reverse The Beat ” is about embracing and realizing your own power that is within you, never giving up, taking what may not be going the way may want and changing it !!!

It’s really at its heart a call to action that we can and will and we are strong even in our darkest moments we should never give in Reverse The Beat Lets Make them Freak !!!

The Song was motivated during a very difficult lonely and depressing time for me, I write from my heart and I saw myself going in a sad direction musically and I said nope I need to “Reverse The Beat ” and went on to write something happy even through a dark time I wanted to bring light to my heart and change my own feelings I embraced my power and wrote for all that may feel beat up by the world bullied on the edge questioning their existence, that it’s just the beginning, live your life day and night.

JRK: You were certainly not alone with your feelings of being lost and frustrated as a child. Can you tell us how you coped with those feelings as a young person and what you did to try to “escape” them.

DD: Well, when you are in those feelings you most certainly feel alone especially as a child or teen even adults. There is a line in “Reverse The Beat” – “You can’t see out when you are in it.”

As a young person, I turned to music and art I would escape in words and music I’m a huge believer that music, theater, drawing painting is the ultimate gift you can give yourself get lost in your creative heart, that’s what I did

JRK: You have stated that “Dance music became an escape from the neighborhood bullies.” Can you explain that a bit?

DD: Dance music was a bond that I had with my mom we would sing all the time in the car in the house wherever, as far as an escape from bullies I would say all music helped me through those unfortunate people I really became a Music Theater geek at one point and I guess I still am.

JRK: You have said that your music is an extension of your personality, as “wild and unpredictable.” Can you explain how so?

DD: Musically I’m constantly evolving ,you never know what will come I do have some signature sounds that are crafted in what I do there will alway be a brightness to my sound. the next few songs will have different vibes I’m not afraid to take risks I welcome them!

JRK: “Reverse The Beat” represents your growth as an artist. Can you tell us how you have grown? What’s changed?

DD: I believe I started to allow myself to push my self. Believe in myself and my art in a way I truly never allowed myself, I have let the negative voices we all have within ourselves that squash you go, I sent that shit packing. I’m working in a much more productive way I’m always learning and believing

JRK: You have begun to see yourself as an activist. Candy Magazine recently named you as a leader of the Trans revolution. How are you living that activism? How can other trans people, as well as, queer folks generally, become an activist, and in a manner that they are comfortable with?

DD: Let’s talk about this in depth as far as Candy Magazine i was featured twice the first time on the cover alongside twelve amazing Trans women Laverne Cox a long time friend as well as Janet Mock people that are making great strides it was an empowering day to have twelve trans women in a studio being celebrated and shot by the world renowned photographer Mariano Vivanco that was for the cover the “Role Models, Leaders of the Trans Revolution” then again as “The Pioneers” along side Amanda Lepore ,Honey Dijon,Connie Fleming and some other extraordinary trans people from around the world none of this would have happened without the loving direction of Editor and Creator of Candy Magazine Luis Venegas .

I don’t think I have recently begun to see myself in that role, I have always been vocal about my feelings if anyone knows me they know I’m far from quiet I speak my mind so if that makes me an activist so be it. I believe anytime I wake up and present myself to the world without apologies is a form of activism I think other trans/queer folk should and most do is very powerful . with Visibility becomes great responsibility I embrace that . not everyone needs to be an activist people have their own comfort levels of visibility I respect that, be your own kind of activist I say do what you can let your feelings and beliefs be known, tell your story there is no right or wrong way to defend and advocate for equal rights for Queer folks you do what you can, get involved in your local community groups stay informed don’t look for political figures to empower us we must empower each other and never hide.

JRK: There’s a line in “Reverse the Beat” where you sing: “it ain’t over, we ain’t finished, not even close, just the beginning.” How does this one line explain why you do what you do? What do you perceive as not being “finished?”

DD: It’s a powerful line, there is so much that isn’t finished, It’s embarrassing and cruel that as a country there are well over a dozen states that have not passed Gender Expression Non-Discrimination Act (GENDA) there is a huge gap in protections for LGBTQ people what is currently going on in North Carolina is despicable,

These foolish Bathroom Bills just keep getting re introduced after being stroke down is a sure sign we ain’t finished!

The Violence against the Transgender Community in 2016 was reported as over 2 dozen deaths that we know of we all know there are more that have gone unreported and this year sadly the number is rising.

1 out of 6 LGBTQ students nationwide have seriously considered suicide

These are just a few FACTS that show “WE AINT FINISHED”

JRK: What advice would you give to other trans persons making their way through this crazy and often times, mean world?

DD: Embrace who you are, don’t be ashamed of the beauty of being Trans, yes there is so much beauty in embracing yourself.

Join community groups use the internet seek them out. Always remember you are wanted and needed and loved. if you feel like you need to talk

Try to surround yourself with like minded people, most of all there is no shame in being Trans! YOU MATTER!

JRK: Trump recently issued a ban on transgender people from serving in the US military. What are your thoughts on that?

DD: My initial thought was anger and hurt, thinking about my Trans brothers and sisters waking up around the world, putting on their uniforms, preparing to serve their country, only to hear this crap from our commander in chief? It was a slap in the face, not only to the approximately 15,000 Trans people serving in the military but to every veteran that has ever served in the military, because it shows that soldiers are disposable.

JRK: What actions would you think to be appropriate by trans military personnel in response to this reprehensible action?

DD: I really don’t know much about the military and its protocols. What I do know is that as a civilian, it is my right and duty to make my voice heard. Yesterday, I participated in a protest alongside Alyssa Milano, GLAAD, Equality NY, Women’s March and so many community organizations. We are advocating LOUDLY for Trans military personnel.

JRK: What should the response be from the larger population by those who support equality for all?

DD: Be outraged but turn that outrage into positive action! I can’t stress enough how important it is to join Facebook groups and pages and learn where you can make your voice heard. I really believe that most people in this great country do support the LGBT community. We can not let this administration turn back everything we have fought for. Take action and resist!

JRK: Are there any parting thoughts you’d like to leave Diversity Rules readers?

DD: We are in such unpredictable times, I wish you all love for yourself and each other.

Go have some fun Life is beautiful even when you’re feeling down gets out and dance!