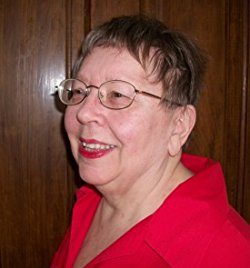 Helen Dunn is probably best known for her novel “Untamed Women of Yesteryear,” published by L-Books, receiving honorable mention by the Golden Crown Literary Society, as well as being nominated for Favorite Lesbian Fiction Historical – by the Lesbian Fiction Readers Choice Awards group for 2011.

Illicit loves, insanity, attempted murder and more occur in the dangerous undercurrents of the small town of Weather’s Mill in the 1800’s.

Veronica Rush is in love with her brother’s bride, and Veronica isn’t the only lesbian in Weather’s Mill.

Dr. Elijah Miller has ugly secrets, that if known, would ruin the community standing he finds so important.

Rev. Graham Merriman is a hypocrite involved in a secret affair which leads to ominous circumstances.

The following is an excerpt from “Weather’s Mill.”

There was no one about on the streets of Weather’s Mill at that hour and only the rare house showed so much as a light. All was quiet, except for the occasional dog bark, meow from a nocturnal cat, and the clip clop of the horse’s hooves combined with the creak of the gig’s wheels.

It was only a short distance to the house of the town’s doctor and they soon reached it. DeLash pulled the horse and gig over to the curb and climbed down. Bidding Veronica to wait there and mind the horse, he went stealthily alongside the house to the back shed where the ladder awaited.

A lone church bell tolled the midnight hour, the last hour that would be rung before morning, and Veronica waited tensely, torn between tears and rage. Kate Miller likewise waited tensely beside the window, which she had opened. It was not long before she saw a dark form moving about on the grounds below and then the sound of the ladder scraping against the house as it was put up to reach the window.

Could she do it? Could she really make herself climb out that window and run away with DeLash Rush and become his wife? For a moment Kate was not at all certain she could. As she stood hesitating, DeLash called up to her softly. “Kate? Kate? Are you there?”

“Yes, I’m here.” Kate called back keeping her voice lowered. She flung her belongings down onto the lawn below. Not sure where they would be spending the rest of the night or the next several days, she had packed a few essentials to take with her.

“Do you need me to climb up?” DeLash asked, placing a foot upon a rung.

“No.” Kate replied, although lifting and managing the voluminous skirt of her dress almost sent her plunging from the window sill. “I only need you to hold the ladder steady.”

Regaining her balance, and now with both feet on the ladder, she was able to descend and did so rather quickly, relieved when she felt the lawn beneath her shoes.

There was a brief discussion on whether the ladder should be returned to the shed or not, with DeLash finally opting to put it back, while instructing Kate as to where the gig waited.

Kate ran across the lawn to the gig. As she reached it, Veronica put down her arm to give her a hand up.

“Veronica!” Kate gasped as Veronica helped her up into the buggy, beside her. “What are you doing here?”

“I’m here to stop you from making a dreadful mistake!” Veronica told her. “Oh Kate!

Don’t marry DeLash. It will break my heart if you do.”

Kate stared into Veronica’s dark eyes, not sure if she fathomed what the French girl was saying to her. Break her heart? How would her marrying DeLash break Veronica’s heart?

“What are you saying, Vee?”

“I think you know what I’m saying, Kate. I love you!” Veronica burst out.

She caught the girl in her arms and pulled her closer to her, found her lips with her own and kissed her as if she might never see her or hold her again. Kate responded, her lips opening beneath Veronica’s, as she pressed warmly back. Her hands went upward, her fingers inserting themselves into Veronica’s rich, black hair – causing the poorly placed pins to give way so that the thick silk of Veronica’s hair spilled down onto her shoulders and brushed against Kate’s face.

“Oh Veronica…” Kate gasped when she was able to again speak. Tears streamed down her face. “If only I could marry you.”

“Why do you have to marry at all?” Veronica questioned.

Kate’s eyes did not meet her own.