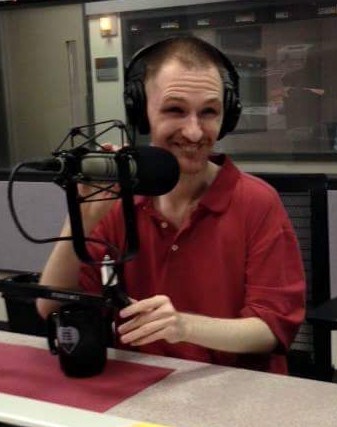 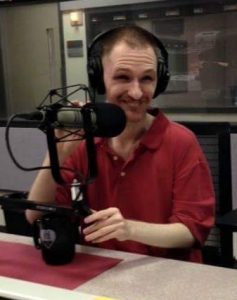 Robert Kingett is a gay blind journalist who is the Author of Off the Grid, Living Blindly without the internet. He actively contributes to blogs, magazines, and newspapers, alongside speaking about such things as video game accessibility. He has received the Professional speaker’s workshop award and has been featured on NPR for his advocacy

Clocks. All they do is tick and make people fret. I’ve been waiting for the latest contestant in the endless game show that is my dating life to turn up. I don’t believe in fashionably late – stylish punctuality is much more my kind of thing – and tardiness should always be explained with a conciliatory text or even a phone call. So far, nothing.

As I’m waiting many things become apparent to me. Its two minutes past the meeting time. I should never arrive first on a date. I should have brought an iPod so that I could read while he grips me in suspense. When I check my cell again its six minutes past the appointment time. With each cast of my baby blues I notice that the original appointment time creeps further away like a detoured fox.

I have to say that I didn’t expect to be waiting on this dashing dude wishing that I had brought my iPod. His profile drew me with quotes from S, E. Hinton and fervent affirmations about is point of view on misogynistic literature. I messaged him eagerly ready to break out the tea bags and sit in front of the screen ready for an intellectual massage. When I click on the send message button it is his picture that makes my mouth salivate. I’m a teenager again as my one good eye stares at a body that’s too good to be true. Taking up the length of the frame and only a fraction of the width, a slightly muscular beanpole stands beside a pool of bubbling water with a face that looks as if it’s been specifically designed to be sexy, cute, and friendly at the same time, sporting a smile that could inspire paintings. Black as the ace of spades, I can see that he easily stands at six feet tall. His eyes are wide and inviting and I can even see them in the picture, something I’m rarely able to do. I suddenly remember what I’m supposed to be introducing and write something about myself, preying to the gay gods that he writes me back with something fresh and vibrant and containing substance… and more pictures.

When the messages arrive I don’t care that they are so short and vague it reminds me of a shampoo flyer. The pictures kick all standards to the side and soon, after only 12 three word questions and answer sessions, a few of which are about my feelings about his skin color, even though he knows I’m only attracted to black men, I’m here waiting on this late beauty. To help ease my discomfort, I chat other people up in the restaurant asking them what they think about the stock market and the new sequel to Hunger Games that’s out in theaters.

I start to feel a bit self-conscious and wonder if the disabilities are too much despite my witty writing. Perhaps, when I told him that I had a stutter, he didn’t know if he’d have enough patience to be around me and let me finish my sentences. Perhaps he’s intimidated by my computer skills and his lack of understanding a USB drive. There isn’t anyone stopping my wild thoughts so as time increases the ponderings become constant chatter in my head.

I may have gone the extra mile with this date, telling the CNA’S to iron my clothes and I schedule to make sure I trim my hair so that my eyes can invite him within mere seconds of intense staring. I may have spent an hour choosing the best kind of shirt and pants possible for the date and I worked on not intimidating people with my understanding of metaphors.

A sudden vibration yanks me back into the restaurant and I whip the phone from my pocket as if it holds a million dollars. The text has a smiley face after it, emphasizing the anticipation. He says his “arrival is imminent” as if he’s a star fleet or an airplane.

I stand up and hastily straighten my already groomed hair and stand at attention, forgetting to breathe. I wait a few seconds but it feels like a lifetime before I hear him ask if I’m his date. The questioning way he utters my name causes my ears to prickle.

A smile lights up my face as I turn to greet the smashing soul but when my good eye processes what I’m seeing my mouth falls to the floor like an arthritic dog. Before me is a short pale man with hair that reminds me of tangled electrical wires grinning with missing golden teeth as if he’s won the lottery. My ears then pick up the buzzing of flies whizzing about his outfit. As I stand there, a dozen land on me and bite me. Continuing to smile like I’m about to issue him a grenade, I cock my head to the side, making a split decision that saves everything in a split second.

“I’m very sorry, but who are you looking for? I don’t think I know this person.”