The following article about Montreal has been graciously provided by the folks at Purple Roofs.  Portions of the  article will appear over the next few issues.  The August installment is about The Village and its night spots.  The September issue will focus on The Village’s guest accommodations. 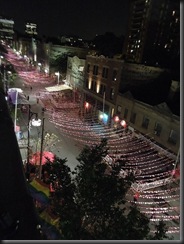 The Village is Montreal’s gay district, and includes a long stretch of St.Catherine’s street, where you’ll find most of the shopping, and a sizable residential area that wraps around it.

To get here, take either the Green ore Orange Line and get off at the Berri Uqam station and look for the exit to St. Catherine Street.  Turn left, and you’re there.

St. Catherine is the largest gay shopping district in North America, and it goes on for block after block after block.  In the summertime, most of the street in the Village is closed to auto traffic (but be careful because cross streets are not closed) and thousands of pink balls are hung on strings up and down the street, giving it as very festive and gay look.

The street is filled with restaurants, cafes, clubs and bars; there are a few fetish stores and clothing shops too, but shopping here is limited.  Just past the Berri-Uqam Metro station, there’s a Jean Coteau drug store – these are ubiquitous in Montreal, and are a good place to stop for basics.

We only ate once here – at Piazzeta, a cute little pizzeria at the corner of St. Catherines and Amhearst – they have a nice deck in the middle of the district, and their pizzas are very thin crusted and light. 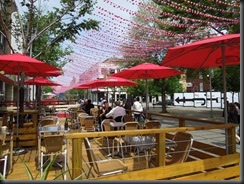 We came back to see the Village at night – it’s a whole different place, as it starts to fill up with the gays and, surprisingly, a number fo straight folks and couples too.

We started at Bar Stock, a strip club at the corner of St. Catherine and Montcalm, that opens at 8 PM, and offers ongoing strip shows with a number of guys.

A lot of the guys are the gorilla type – big, muscular, and likely straight.  And here’s where the leg rubbing comes in.  Two of the guys spotted us and came over to talk… they say down next to us and leaned in close, and one of them rubbed my leg while telling me how nice it was to talk with me.

The shows also include a bit of full frontal – including one of the guys who strutted up and down the stage without anything on, removing the “tease” from strip tease.  There’s also apparently a back room for private dances, as we saw several guys being ed back there by some of the dancers.

It was a bit disconcerting to have an apparently straight guy come on to me so forwardly right in front of my husband.  Guess we made ourselves fair game by going there in the first place! 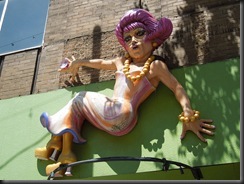 Next we went to Mado, the local drag club – Mado has drag shows at 11:15 PM nightly. But get there 45 minutes early if you want a good seat.

The shows are mostly in French, although some songs are US pop hits – and the level of talent was high – some of these girls are ready for RuPaul’s Drag Race.

One of my favorites was a drag queen who looked like a librarian gone bad, singing a song with a German song called “He Vas My Boyfriend.”

The show was a lot of fun, even with a language barrier.  The host asked (in English) if there were any tourists there, and we said yes.

She asked what we were there for, and Mark said “Business”.

She gave us a funny look and said “Christmas?????”

There was even a bachelorette party there, and one of the girls came up to us afterwards and offered to translate.  Very nice people in Montreal.

For a nightcap, we went to the terrasse (terrace) at Sky Pub at St. Catherine and Alexandre de Seve.  The Montrealers are big ontheir terrasses – after a cold, hard winter, they want to be out in the sunshine as much as possible.

The terrasse at Sky Pub is a large one, spanning most of the roof – with a view over St. Catherine’s.

There are two bars up there, and the waitress was pretty quick to come and take our order.  We spent about half an hour up here enjoying the vibe – it was a beautiful night, and lots of folks were out.  They were serving tequilas and something blue b y the pitcher – the table next to us was halfway into their second pitcher by the time we left.

Appalon, at the corner of St, Catherine and Rue Plessis, is more of a disco, and draws a younger crowd. 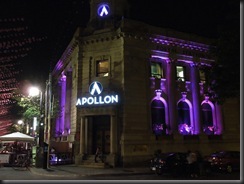 There are so many other bars and venues along here – you could spend a week checking out the Village’s gay nightlife.

There’s also a really cool public art project here called Memory Haps – a series of black walls covered in white writing and images – that “invites you to take a walk down memory lane that is no longer part of you.”  The walls have a series of steadily smaller holes that you can look through, as well as hidden messages to decipher, some that are only apparent from certain angles.