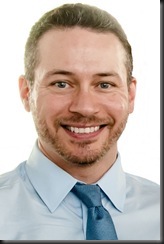 Frank Anthony Polito is the founder and Publisher of Woodward Avenue Books. He received his BFA in Theatre from Wayne State University and his MFA in Dramatic Writing from Carnegie Mellon. He is the author of the award-winning novels Band Fags! and Drama Queers! and the Young Adult novel Lost in the ’90s. He currently resides in Pleasant Ridge, Michigan. For more info:

Frank Anthony Polito first hit the LGBT literary scene back in June 2008 with his debut novel Band Fags! The story of gay teen best friends growing up in the Detroit suburbs during the 1980s was one of the most read books of the summer and was named “Best Fiction” of the year by members of the InsightOut Book Club.

Band Fags! later made headlines in 2010 when the book’s fan page was removed from Facebook after its title was deemed “offensive.” The sequel, Drama Queers!, followed in 2009 and received the prestigious Lambda Literary Award for “Best Gay Romance.”

Polito returns now with another installment in his “Hazeltucky” trilogy, taking his pop culture-filled adventure
from the Totally Awesome ’80s into the Nirvana-full ’90s with The Spirit of Detroit. 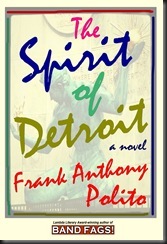 September 1992. Madonna’s SEX is poised to hit bookstore shelves, The Crying Game makes its cinematic debut in limited release, and George H.W. Bush will soon square off against William Jefferson Clinton in the battle to be elected leader of the Free World.

After abandoning his dreams of becoming a famous actor, Bradley Dayton returns to his roots and enrolls as a Theatre major at Wayne State University in Detroit—a town known for its rich cultural history, as well as its gritty urban decay.

But a new cast of characters begins to interfere with his education as these friends (and lovers) induct Bradley into their dark world of backstage drama. By semester’s end, he will have spent many a wild and sleepless Motor City night…and found his fair share of thrills along the way.