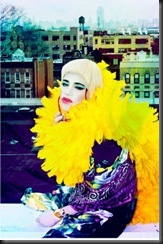 It is the newest work from the duo that sparked headlines last month with their provocative images of NBA player (and Kim Kardashian ex-husband) Kris Humphries.  That collection, published in WestEast Magazine, revealed a stripped down Humphries in underwear and a partially bared chest; capturing a dark, raciness rarely seen from American pro athletes today. In Tragic Glamour, Logan and Warburton continue in their quest to showcase the concealed life of notables.  Yet, these images with Richie Rich and his boyfriend Ross Higgins offer the flipside to Logan and Warburton’s previous works that have focused on daytime personalities at night.  Tragic Glamour is a glimpse at nocturnal celebrities living under the harsh light of day.

“At night, in front of the flashing light bulbs of the red carpets, Richie and Ross radiate like beautiful peacocks,” says celebrity stylist Derek Warburton AKA Derek Fabulous. He has worked with Beyonce Knowles, Zach Braff and Molly Sims, and appeared on season three of the Bravo’s The Real Housewives of New York City. “Yet what works at night doesn’t always work during the day.”

The idea for Tragic Glamour was conceived when Warburton happened upon Rich and Higgins on the street in the East Village of New York City last year.  “They were dressed in lavish couture will full beaten make-up,” he recalls. “Yet they were roaming the streets like high fashion vagabonds.  They were literally dressed with no place to go…  It felt a bit sad, tragic even.”

“It occurred to me how Richie Rich is a victim of what America has become today where one minute, celebs are idolized and the next forgotten.”

Richie Rich co-founded the fashion design house Heatherette in 1999. The label’s popularity exploded when Foxy Brown, Lil’ Kim, Gwen Stefani and a bevy of Hollywood’s finest began wearing their clothes.  Heatherette’s runway show were famously populated with the likes of Paris Hilton, Mena Suvari, Lydia Hearst, and many of New York’s most notorious drag queens.  The hard-partying label’s success eventually began to plummet when they lost their financial backing in 2008.

Similar to the characters depicted in the work, Logan’s prints are larger than life with canvases measuring 48×60 and 30×40. “I wanted the photos to be gigantic; to push beyond the boundary of what is considered acceptable-sized art. It’s a nod to Richie Rich whose entire career has been built on amplifying preconceived notions of normalcy.”

Though less known, Logan felt it was important to include Ross Higgins in the exhibit because of the magnetic energy the real-life couple emits when they are together.   He says there is a lot the world can learn from the vibrant duo.  “Most people take themselves too seriously.  We stifle our creativity when we should be embracing our color within.”