Tarringo T. Vaughan always believed he had a love affair with literature.  One of the first pictures he saw of himself was of him at maybe the age of three or four year’s old sitting with a book in his hand.

He is the founder of the Flexwriters Creative Network.  Future plans include a publishing company as well as actual an actual café for writers and spoken word nights.  His writing consists of many styles as he does like neglecting rules and going beyond the norm.  The website address for FCN is:  (http://www.flexwriterscreativenetwork.net).

Many say they are nuances as they study their own adolescence with rebellion.  They masquerade in front of these storefronts and on these busy sidewalk curbs as challenged faces barely old enough to cry.

a young Asian girl stands in my way as I try to get by. She is smoking a thin cigarette, slightly puffing from the side of her pieced lip.  Her left hand is covered by a black glove as she ignores my presence by rolling her eyes with her other hand.  The expression on her face gives me the middle finger but the sadness in her stare politely asks me to notice her.

She is there quietly singing with a loud voice in style. Misunderstood by the nature of her appearance is a girl searching for her place in a world ignoring her, telling her she’s no good.

And as I watch,

a skateboarder showcases his tattooed anger by blindly shifting out into the open street of passing strangers. 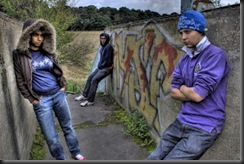 He is risking his tomorrow and they are risking his discovery as they honk their horns to the glare of his eyes shouting ‘fuck you’ as he pushes his board with worn down Sketcher sneakers.

For the moment the stage is his as his spiked Mohawk makes its way to the other side of the street where a group of Black and Latino kids battle back in fourth in a lyrical game of rhyme.  Their words are fulfilled by their hardships as their voices express the conflict of human struggle. They speak the language of adulthood from the bodies of children hardened by the victories of poverty.

And as I listen,

I hear the breath of a generation wheezing in the fields of definition. They are an asthma as they seek to open new lungs in the dampened air of expectations.

They are the young Americans — a new age of voices traveling through different languages for growth and for the freedom to be heard.