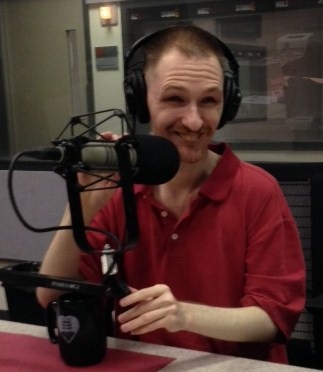 Robert Kingett is a journalist and author who writes and speaks about many subjects including LGBT and disability rights. His journalism work has appeared in several magazines, websites, and anthologies. He is the creator of the Accessible Netflix Project. His memoir, entitled Off the Grid, is an account of living blindly without the Internet.

There’s an old saying that people often say when they’re torn between telling little white lies that lead up to heaping twiddle. It’s a phrase used all the time in movies and TV shows and other forms of media that I find very educational because they make me want to read books. It’s the phrase “honesty is the best policy.”

People are afraid of online dating because they are afraid that they won’t get an honest contestant. Of course people won’t be honest but dating is like fishing with different kinds of fish – some of which don’t know how to swim the right way – and others will never bite the bate. The point of dating is to try something new and meet someone new and see if you have the right kind of bate for that particular fish.

As I’m dangling my hook in the vast recesses of the World Wide Web I come across a young lad that I have never seen before. Usually on this site faces become so familiar you can tell how much they have aged when they upload new pictures. The new picture captures my good eye at once because the smile flashes blinding pearly whites at me instead of other body parts. I eagerly click into the profile and gaze at an enlarged image of this new potential. He’s tall – standing up straight as an arrow, this mocha brown spirit displays his photogenic talent by leaning against a wall, elbow resting slightly poised so that his cheek is resting on his hand. The blinding pearly whites draw me in even deeper upon closer inspection because their emphasized by the smile. His smile is so friendly bricks would fawn over him. The eyes compliment the smile. They are very open and easy to see – the picture is very clear – something that’s a rarity on this dating site.

He’s an erudite grammarian as evidenced by the spelling and grammar he displays when he writes about his various interests and thoughts. He’s a cat collector. This makes me want to marry him immediately. He loves to read any genre. He even includes a link to his Goodreads profile.

Since he includes a Goodreads profile I vow to stalk this ebony deity. Something that I notice, however, is all the basic details are missing even though the descriptive text makes up for that. The height, weight, relationship status, and hair color are all blank. The only fields that are filled in are HIV status and the smoke and drink slots – he’s a no on both. As I’m staring at his stimulating picture, I hear angels singing. A notification pops up saying that he’s viewed MY profile. Another notification pops up a few minutes later and I realize that I’ve been in heaven these past few minutes. A message has arrived. I open it with shaking clicks.

“Hello! My name is Alex. I just have to say that you’re cute.”

This game is not new to me, so I smirk before I have a chance to read the next line.

“I realize that sentence above won’t make me win you over, given your profile, so I want to introduce myself formally. I just wanted to tell you something you may not know.” the perception gets my fingers flying so fast they stir up weather patterns.

Dozens of messages that could rival legislations at the white house lead us to a dashing night. We’re sitting in a flourishing restaurant that I have never been to before, our peepers fixed on each other as if we were born to stare at one another among sparkling conversation and boisterous laughter. We’re eating and talking, emphasizing our good time with flows of feelings and thoughts. When the dinner is over I can’t believe that he’s single so I ask him if he is.

“Am I single? Oh god no. I’m not single.” instantly I feel myself blanching as my brain stutters in reply. My mouth hasn’t even made it to a stutter yet.

“I’m not single. I have an open relationship with a guy.” I don’t believe in them at all, and believe that they are more trouble than anyone notices. I tell him this but he assures me it’s the norm now.

“I just don’t understand how your boyfriend would be okay with me being here.” I splutter. He smiles, very calm, not fazed by my morals at all.

“Well, Robert. We all have different feelings and thoughts. He and I have different ideas of a relationship than you do. I thought you’d be pretty good with that. I thought you were going to be someone who we could share.” I shake my head so hard the wind halts. His demeanor has changed to a bitter simmer. It is now that I see the ring on his finger. He’s married. He didn’t have a ring in any pictures on the site.

“No. even if you tell each other what you’re doing, and I don’t even know if you do… see that’s cheating. That’s not an open anything. You’re going behind closed doors to get something that you want to get. You should get it with openness and honesty.”

He shakes his head, smiles, and pats my hand as if I’m a delirious child. “You just don’t understand – it’s okay.” Soon after, he sees me back to my apartment and then leaves, giving me a hug. His voice brimming with sincerity, he exclaims he had a good time. I have to admit, I did to.

A few days later I’m sitting in a coffee shop for gay people writing a news article when I sense someone sit down across from me. I look up and Alex is there. A worker clears Alex’s place, and they talk. Since I’m close, I gape at the matching rings on their fingers. Suddenly, another worker trips and coffee soon splashes towards me. Alex’s husband quickly comes over and mops up the mess. He’s just as friendly as Alex, with deep dark skin and very gentle hands. His smile is infectious.

“Oh gosh. I’m so sorry sweetie. Are you okay?” he asks as he cleans the spill. He’s a sweetheart – he deserves better.

“Yes. I’m fine… well; actually, I think some got on this table. Can you wipe it off?”

As he goes to get napkins I quickly type out a text on my phone and place it on the table. He returns in a flourish, sincerely apologizing that he’s interrupted my writing. He really is a sweetheart.

“Right here…” I say, pointing just to the left of my phone. He begins to wipe and then he reads the message I have typed. “Alex went out with me last night, and others.” As I stand up to leave, a tearful voice whispers thank you. I’m not sure how to say, “You’re welcome.”