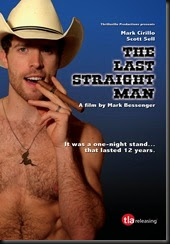 It’s every gay man’s fantasy- sleeping with their straight best friend. Lucky for Lewis  (Mark Cirillo) that’s precisely what’s about to happen. When, after a night of heavy drinking at a bachelor party, Cooper (Scott Sell) and Lewis end up in bed together, the two men decide to meet in the same hotel suite on the same night each year. We see four nights, spanning a twelve year period depicting how their relationship changes as time goes on. The Last Straight Man is like a sexier, hotter and, well, gayer version of the Before Sunrise series.

First:  The Last Straight Man is an honest, bittersweet and consistently sexy story about falling in love with a guy who loves to mess around and steals your heart, but insists that he’s straight.

Second:  Mark Cirillo (The Seminarian, The Men Next Door) and Scott Sell (Out to Kill) make a smoking hot pair!

Third:  This movie was written and directed by Mark Bessenger, the same guy behind the hit gay comedy-horror flick Bite Marks.