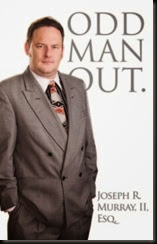 Joe Murray is a successful attorney and political pundit. A graduate of the Hofstra University School of Law in Hempstead, New York, Murray has built a thriving civil rights practice in Ripley, Mississippi. In addition to operating his law practice, Murray is a former columnist for the Philadelphia Bulletin and has had a number of columns published in newspapers like The Tennessean and The Des Moines Register. Murray continues to write columns for various news outlets.

Ever wonder what it is like to be a longtime member of the Christian Right and a married gay man? Ever believe that such a combo would make Ozzie & Harriet look like Oscar & Felix?

Joe Murray was a longtime cadet of the Christian Right and spent the early years of his life building a resume that might make Goldwater envious. He served as a member of Pat Buchanan’s Presidential campaign staff in 1999 and was appointed to the Alliance Defending Freedom’s prestigious Blackstone Fellowship for budding Christian attorneys in 2000. He spent a number years working on the front lines of the “Culture War” as a Staff Attorney for the American Family Association. He worked with the Pennsylvania Pastor’s Network and was a columnist for the conservative Philadelphia Bulletin. Murray, a Conservative Catholic, also happens to be gay.

In his new book, Odd Man Out, Murray tackles the misconception that one’s identity should predetermine one’s politics. Murray’s background has provided an excellent opportunity for a frank discussion on a number of social policy issues that are presently dividing the nation. Building upon his experiences working deep inside the Christian Right, Murray discusses how public interest politics has led to a perverse politics in which profit overtakes principle. He shines a light on some of the not-so-Christian events he witnessed while working for the Christian Right and he talks about some of the rivalries that existed (and continue to exist) on the Right. Murray uses his personal story to take the reader behind the scenes of Christian and gay politics and, in doing so, offers new insights on how to frame the controversial discussion.

Though a piece of political nonfiction, Murray’s new book is also intimately personal. Murray shares a number of stories that have molded his life and shaped how he sees the world. He opens the door for readers to see how a Catholic, Libertarian-leaning, Irish-American, gay attorney is able to fully operate in society, despite the political perception that he is an ideological inconsistency. Murray uses his personal experiences to argue that people should use their identity to expand their ideas, not limit them.