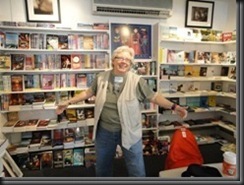 Lee Lynch wrote the classic novels  She lives in rural Florida with her wife and their furry ruffians.

We fled Flatonia, Texas, like it could pursue us. We’d be back home in the Pacific Northwest in just a few days and, we hoped, bed-bug-less. Once on the road, my sweetheart read to me about Flatonia, which boasts 8,000 people and a proud melting pot history.  We sped over San Antonio on I-10, a pretty city of light-colored architecture we want to explore some day when we recover from traveling. The more I see of America, the more I want to see.

Where El Paso by night looked like the inner circle of hell, as my sweetheart described it, in the daylight it was just another crowded city, baking in the desert heat. We motored on, stopping at a LaQuinta in Fort Stockton, Texas, gleeful at its cleanliness. We bought a little $.99 moon cactus there, named her Cactus Rose after the Larry McMurtry  book, and went on for lunch to the very windy outskirts of Las Cruces, New Mexico. Las Cruces is a required stop; writer Cate Culpepper and her imagination were nurtured there (Riverwalker, et. al). We’d planned to visit an Alice B. Readers Appreciation Awards committee member, but messed up our geography and settled for her promise to visit us on the coast.

We have Butterfields in our extended family, so paused at a funny little place   called Butterfield Station. It’s not even a town – just a tourist trap 20 miles west of Deming, New Mexico, and named, presumably, for the mid-1800s Butterfield Overland Mail route between San Francisco, St. Louis, and Memphis.  A little research revealed it’s actually one of a modern day chain of tourist traps, but we couldn’t resist a kitschy souvenir or two for our Butterfields.

We spent a morning of homage to Tucson’s vibrant women’s community. I had the honor of being a friend of the late lesbian pulp fiction author Valerie Taylor (Whisper Their Love 1957, Stranger on Lesbos 1960, et al.) We went to the site of her tiny home on Grande Avenue, and found nothing but a car wash where there should have been a museum or, at the least, an historical site marker.  At least her manuscripts are safe at Rutgers University and we were able to console ourselves with a trip to Antigone Books, one of the last brick and mortar women’s bookstores. It’s in a bright blue building in a quirky shopping district. We left with a heap of books and some gifts for friends. A fun place to shop, on line or off: www.antigonebooks.com.

I developed a hankering for a donut. Correction: many donuts. I have always had a warm spot for Tucson and the city came through again. Mrs. Bundt, our GPS, found melt-in-your mouth donuts. Who would have thought a couple of Yankees from Dunkin’ Donut Land would find spectacular donuts in the Southwest.

Before we left Arizona we had one more stop to make. Buckeye, east of Phoenix, is the hometown of Sue Hardesty, author of The Truck Comes on Thursday, et. al.) which draws on her memories of the area. We picked up every trinket we could. When we got home and she went through one of the history books, she discovered a picture of a long ago girlfriend.

Pasadena was next. Alas, we’d lingered in New Mexico too long and were too tired to find any kind of eatery, donut or not. Then we discovered a big city plum: a food delivery service that would come to the motel. It was fast, inexpensive and brought us something other than MacDonald’s burgers. What a deal.

We skirted the gay heartland, San Francisco, and high-tailed it to Hayward, CA the next day to be on time for a get together with beloved author Karin Kallmaker and family. It turned out to be Karin’s annual birthday dinner, but she and her wife graciously included us. The food at her favorite restaurant was as rich and tasty as her books. I had the pleasure of sitting across from her daughter, as engaging a conversationalist as Karin.

We were getting close to home and had one last stop to make. My great grandfather Lynch came from Ireland for the Gold Rush.  He did well enough to buy a horse farm in Petaluma, California. I’d passed over Lynch Creek on 101 a few times and always planned to explore.

Visitors Center staff greeted us like long lost – Lynches! For various reasons, including being queer, I’ve never felt rooted anywhere, especially in my family, until recently. Here, I was a prodigal daughter. They gave us maps and sold us history books then found more things to give us, including directions to Lynch Road.

We headed out to Lynch Road, not far from the burgeoning city full of historical buildings and handsome stores. Lynch Road is, indeed, in horse country. From the moment we turned onto it, I felt the peace of groomed pasture and well cared for animals. My ancestor chose well. The area smelled clean, the horses, stables and houses are proudly kept.

Later, my sweetheart read that Sonoma Mountain Equestrian Center is located at 100 Lynch Road. It’s associated with the horse rescue organization, Cimmaron Sanctuary. Which is weird. I’ve never had much to do with horses, but developed a ferocious belief, in my youth, that animals, especially horses, were not created for human convenience or pleasure. I’m still adamant about that.

We needed to hit the trail so drove around downtown Petaluma, imagining what it had been like for the early Lynches. All three sons became railroad men and settled in upstate New York and Western Massachusetts. For all I know I might have had gay great uncles. I have no idea what happened to the farm or my great grandparents. But that land, the old Lynch land, rang some deep bell inside me I never knew was there.

That night we enjoyed another old West town: Eureka, California, which sits at the south end of Arcata Bay just before the redwoods. The motel clerk sent us to a pricey restaurant with a snooty waitress and mediocre food, but the next morning I went to a maze-like, woman-owned used bookstore in Old Town Eureka, Booklegger, and found some Judy Grahn poetry and an old paperback copy of Patience and Sarah.

Patience and Sarah, by Isabelle Miller, originally titled A Place For Us. We headed north out of Eureka to a place for us, finally going home.

Make sure you don’t miss this and all the other great articles and information in the June issue. You best subscribe NOW. Queer Pride Month Special: Subscribe during the month of June and get 15 issues for the price of 12 PLUS a digital subscription for yourself AND a friend — 2 for the price of one. Subscribe online at: