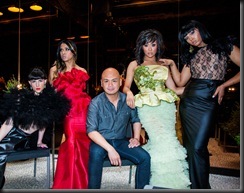 What’s the T? by out filmmaker Cecilio Asuncion explores the lives of five transgender women as they fight to make their marks on the world. These are the riveting stories of courageous young adults facing adversity head-on in order to achieve their life dreams on their own terms. They are Armani, a nurse at a rehab facility who competes nights in the underground ballroom scene; Vi, a pre-med student; Mia, a former homeless teen elected to a post on the San Francisco Youth Commission and now working toward a career in politics; the boldly independent Nya; and Cassandra, a stage performer with sites to conquer the world. Film production began in 2011 with filmmaker Cecilio Asuncion, who also stars in the film, following the young women for over a year. What’s the T? is currently playing select film festivals throughout the world.

JRK:  Can you give Diversity Rules an idea of who Cecilio Asuncion is, a bit about your background and how it impacted the person you are today.

CA:  I am an out Filipino Gay Man and was lucky enough to have been born to a very supportive Family. Coming out was not a very big deal. When I told my mom I was gay when I was 16 or 17, she said she only had one question for me, which was “Are your boyfriends cute?”. I am very grateful that my family had always been supportive of who I am and it’s because of that support that I find myself to be unapologetic about my views as a film maker and as a person, sometimes to my detriment.

JRK:  Can you talk about “What’s the T?”  How did you conceive the idea for the film?

CA:  I had seen a young transgender girl on the Anderson Cooper show and the story resonated to me in a way that as a Gay Asian Man, I did not have many people in the media to look up to. I wanted to do a documentary that was different and would also make a difference in people’s lives. Hence, “What’s the T?”

Make sure you don’t miss Cecilio’s feature and all the other great articles and information in the June issue. You best subscribe NOW. Queer Pride Month Special: Subscribe during the month of June and get 15 issues for the price of 12 PLUS a digital subscription for yourself AND a friend — 2 for the price of one. Subscribe online at: