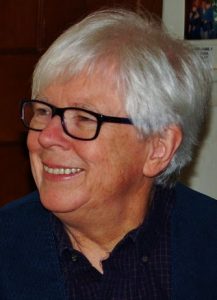 Lee Lynch’s most recent book, An American Queer, a collection of “The Amazon Trail” columns, was presented with the 2015 Golden Crown Literary Society Award in Anthology/Collection Creative Non-Fiction. This, and her award-winning fiction, including The Raid, The Swashbuckler, and Beggar of Love, can be found at:

Femmes And Their Gadgets

It’s a shame, the things they don’t teach us at Butch School. In the Femme Gadgets class, I learned the basics of eyelash brushes and powdering noses and hoop, stud, drop, climber, and jacket earrings. The femme who has been cutting my hair for about twenty years was today appropriately made up and earring-ed, her own hair mostly blue with a complimentary green streak along the part. She obviously has great fun with her various girly tools.

But that’s not what she was all excited about. It was Vector, her Kickstarter miniature robot. Vector is not without its useful functions but is mainly an adorable, irresistible gadget that has learned to say her name.

Then, lo and behold, I arrive home and the mailperson has brought my sweetheart a five-inch fan. Small enough for travel, it runs off a USB energy source or batteries. It’s the most flexible little fan I’ve ever seen. She set it up and demonstrated its features one by one, including its big clamp, its three speeds, and the fact that it was for me. I’m staring it down as it challenges me to try it a day later after I’ve forgotten all the instructions.

My sweetheart also wears a Fitbit and figured out every one of its functions, though she reminds me that we haven’t yet checked her heart rate when kissing.

When arthritis in my thumbs flared up, she was the one who found me a nifty gadget that twists off bottlecaps and lifts up tabs to open cat food cans. She also found me an electric jar and bottle opener which I’m still learning to use—she was an expert within five minutes. If I manage to position the clamps so they embrace a lid, I get stuck at the dismounting and the contents splatter all over the counter.

Possibly the most exciting of her gadgets, which come free, except for taxes, through a reviewing program, was the little toy drone. She’s still trying to get it to work again after hours of setting it up and experimenting. One of our male, mechanically-inclined neighbors, who owns three real drones, came over to help, but it was my sweetheart who diagnosed the problem: the battery power drains so fast the wee drone bounces off walls, kitchen appliances, lamps, mirrors, and doors. The neighbor periodically asks if we have our pilot licenses yet.

A few weeks ago, a planter arrived. It’s about five foot by three foot and three feet high. Assembly required. Lots of it, including a water gauge thingy. My sweetheart loves doing this stuff. I was sent to the office to write. Last week, the “shed” made its appearance. (We’re really friendly with our UPS driver.) It’s basically an ultra-sturdy toy chest for garden equipment. Or for toy drones with unresolved issues. She was exhilarated: fabrication required using the electric screwdriver I gave her as a jokey birthday gift. I’ve discovered the joke is on me.

I thought I was gadget-happy, but do not get between femme and her mechanical puzzles. Even the clunkers.

The rice cooker wasn’t really a clunker. It worked fine for many meals. Then one day my sweetheart forgot to place the bowl in the cooker before filling it with water—the electronics were soaked. It still worked, but she enthusiastically welcomed the next rice cooker she was sent to review.

I voluntarily absent myself from her industrious zone when tricky things come her way. The dash cam, for example, took some doing on her part. As have the cat towers, all three of them. I offered to assemble the most recent one, despite knowing I’d need to give up and ask for her help when I inevitably blew it, but she forestalled that eventuality by declining my offer.

I have the patience to write a novel, but not to read directions. Especially when something comes along like the OBD2 which, she had to explain to me, is an automotive onboard diagnostic tool. But the tool is useless on its own. You have to download an app called Torque to get the two to work together. Heck, I had enough trouble setting up the simple Mini

Google Home and even it couldn’t answer my questions about how an OBD works.

Where no woman has gone before, my sweetheart perseveres. We don’t have a lawn, barely even a yard, but when we get another pint-sized dog, she plans to fence and grass over a patch behind the house so we can let our puppy-to-be outside in the Oregon rain. The only obstacle she came up with was buying a lawnmower. She had her eye on lightweight electric models when, voila, she received one to review. And build.

We now both have car battery chargers and automatic tire inflators. I’m not sure how I’ll make them work if I’m alone on the road in my fifteen-year-old car. Even Vector needs a femme.