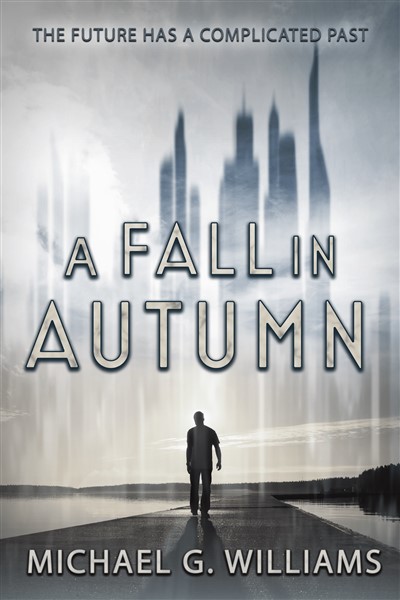 Falstaff Books is proud to announce the publication of A Fall in Autumn, the first in a five-book science fiction series from award-winning author Michael G. Williams. A Fall in Autumn begins Tales of Autumn, a far-future science fiction detective series focused on the myths, mysteries, and conflicting faiths of the world ours might become. The series was released in print and ebook by Falstaff Books on January 2, 2019. Audiobook will be released at a later date.

It’s 9172, YE (Year of the Empire), and the future has forgotten its past. Soaring miles over the Earth, Autumn, the sole surviving flying city, is filled to the brim with the manifold forms of humankind: from Human Plus “floor models” to the oppressed and disfranchised underclasses doing their dirty work and every imaginable variation between.

Valerius Bakhoum is a washed-up private eye and street hustler scraping by in Autumn. Late on his rent, fetishized and reviled for his imperfect genetics, stuck in the quicksand of his own heritage, Valerius is trying desperately to wrap up his too-short life when a mythical relic of humanity’s fog-shrouded past walks in and hires him to do one last job. What starts out as Valerius just taking a stranger’s money quickly turns into the biggest and most dangerous mystery he’s ever tried to crack – and Valerius is running out of time to solve it.

Now Autumn’s abandoned history – and the monsters and heroes that adorn it – are emerging from the shadows to threaten the few remaining things Valerius holds dear. Can the burned-out detective navigate the labyrinth of lies and maze of blind faith around him to save the City of Autumn from its greatest myth and deadliest threat?

MICHAEL G. WILLIAMS is the award-winning author of the genre-busting suburban fantasy vampire series The Withrow Chronicles, the historical urban fantasy series SERVANT/SOVEREIGN set in past and present San Francisco in the world of Falstaff Books’ Shadow Council Archives, the new science fiction detective series Tales of Autumn, and numerous short stories in – and across – the genres of science fiction, horror, and urban fantasy. He was a contributor to Onyx Path Publishing’s Wraith: the Oblivion 20th Anniversary Edition and is developing a tabletop roleplaying game based on The Withrow Chronicles.