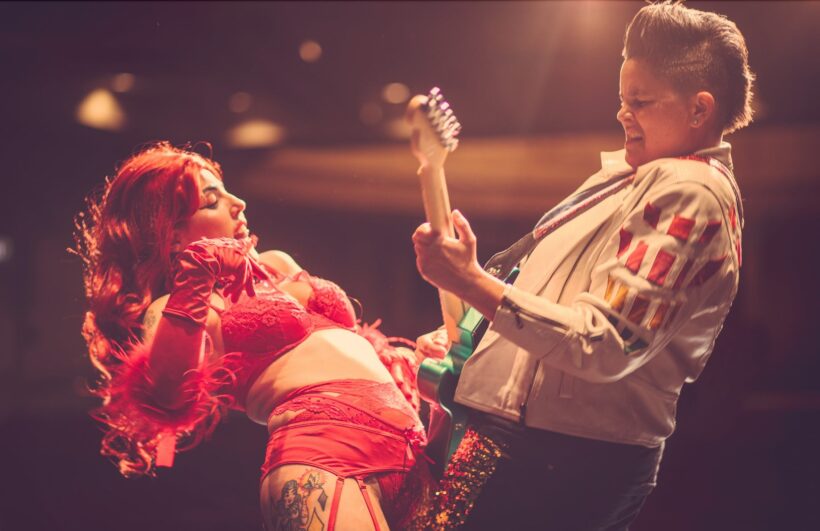 Talia Keys is celebrating Pride month with the release of a new music video that calls for today’s queer generation to be loud and proud of who they are. Written and produced by Keys, “We’re Here” is a reggae-inspired, feel-good anthem that is broken into three parts. The first verse is about the internal struggles many LGBTQ youths face when their outward appearance doesn’t quite fit the societal mold. The second verse challenges them to smash the patriarchy of society’s expectations around gender binaries. Finally, the outro encourages all to own who they are because by simply existing, they are changing the world into a better place. “We need to fight the status quo,” asserts Keys, “Because like it or not, We’re Queer, We’re Here and We aren’t going anywhere.” Talia Keys’ “We’re Here” is available now on Apple Music, Spotify, and all digital platforms. Its music video is on YouTube.

“I was inspired to create ‘We’re Here’ because I grew up in Mormon Utah as a closeted queer Catholic girl,” Keys reflects. “Being different in Utah put a target on me. In school, I was bullied for being a Tomboy and then I became a bully to protect my secret.” When she finally came out in her mid-twenties, Talia, a successful musician, lost fans and gigs, but she kept her drive. Today, she uses her music and performances to preach the good word of love, acceptance, and fucking shit up. “I see the stage as my platform to spread awareness.”

That message is echoed in the “We’re Here” music video. It was shot in an empty theater because, as Talia explains, “Sometimes it feels empty when you come out and the support you once had is gone. As queer people, though, we learn to be strong-willed and to perform with our entire heart, even if it is to an empty room.” She also wanted to shed light on the fact that queer art is suffering during the pandemic.

The video features several queer, trans, enby artists and drag queens. “We’re Here” stars Madazon Can-Can, a gender non-binary drag king, burlesque dancer, and clown. “I first saw Madazon Can-Can perform at our local Pride and was captivated by their ability to entertain rowdy queers, dance burlesque, shine as a drag king, and make us laugh and cry as a clown,”

Talia says. “When I began visualizing the We’re Here’ video, I immediately thought of Madazon whose multifaceted talents would be able to convey the message of the song.”

Talia Keys is an activist-musician who has enjoyed a loyal following in Salt Lake City clubs for over a decade and has made a name for herself on national tours and jam festivals from coast to coast. Growing up, she and her brother were raised by a single mother. Her dad struggled with addiction and his battles forced Talia to grow up sooner than one would expect.

Still, she was a kid with a big imagination and whether she was pretending to be Michael Jordan or impersonating Elvis Presley, Talia could entertain herself for hours. She began piano lessons at age 9, drums at 11, guitar at 16, and mandolin at 22. Music was always very prevalent throughout her youth, beginning with The Beatles and turning to Bob Marley in middle school. Aretha Franklin, Janis Joplin, Pink Floyd, and Talking Heads were some of the other artists that played a big role in her musical development. She even had a Kris Kross phase (and yes, she wore her clothes backward for a time). It opened Talia up to rap and hip hop and she became a huge fan of Tribe Called Quest, The Fugees, and Blackalicious.

Talia Keys’ trademark fire and brimstone stage presence is an amalgam of her journey, identity, and musical influences. While her physical appearance may scream LESBO, her music does not. It presents a modern twist on the rock n’ roll troubadour singing songs of struggle and ultimately, triumph.